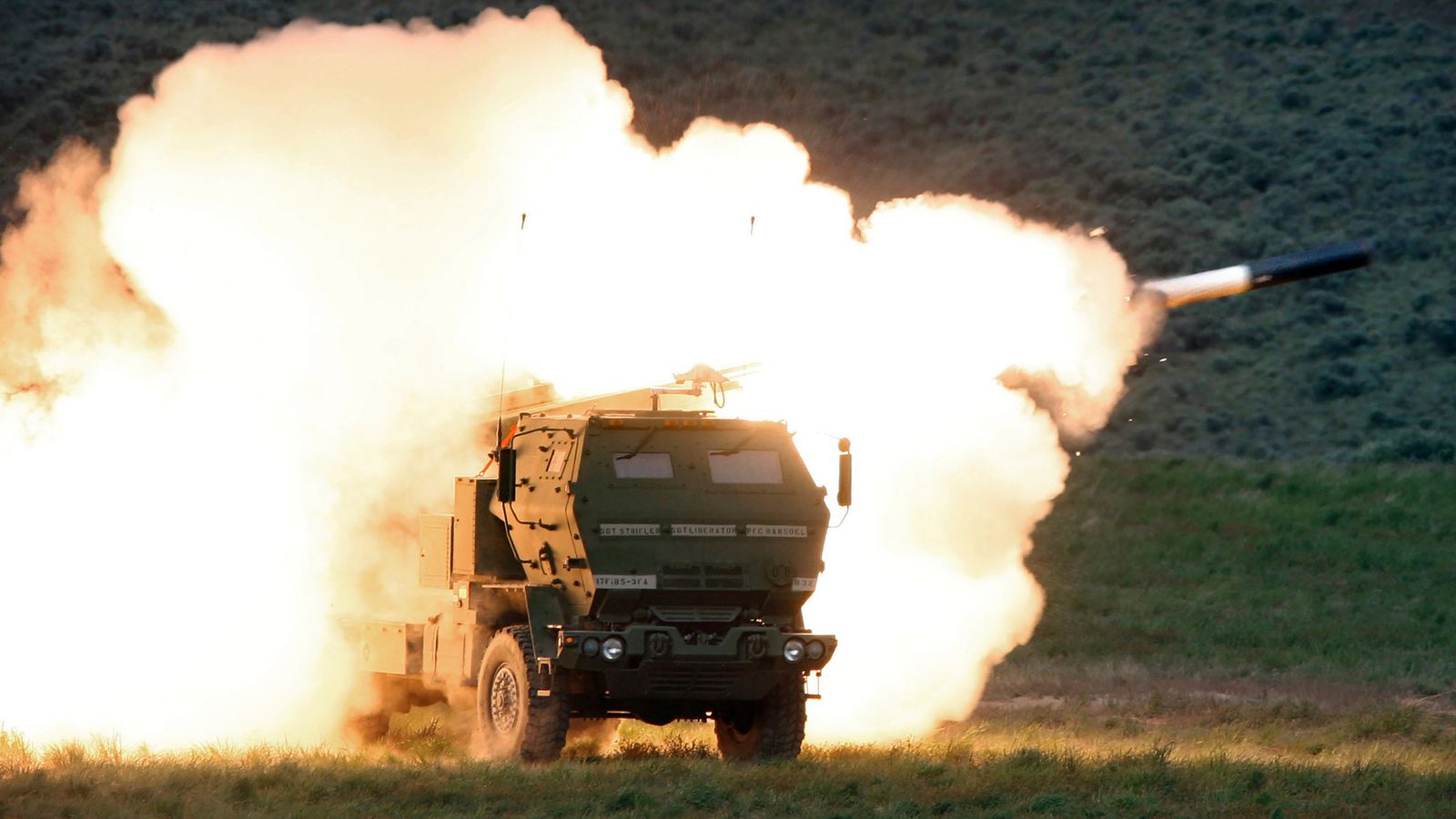 Joe Biden has announced the US will send medium-range rocket systems to Ukraine to aid its forces as they struggle to stall Russian progress, in an apparent change of mind.

The US president said on Monday that Washington was “not going to send to Ukraine rocket systems that can strike into Russia”.

But with Vladimir Putin‘s forces making advances in the Donbas region, the decision to deliver the High Mobility Artillery Rocket System (HIMARS) was taken on the condition Ukraine does not use it to launch strikes over the border.

Officials say the systems are part of a new $700m (£556m) package of security assistance for Kyiv from the US that will include helicopters, Javelin anti-tank weapon systems, tactical vehicles, spare parts and more.

The White House hopes the decision to provide the advance rocket systems strikes a balance between the desire to help Ukraine stave off Russian artillery barrages while not providing arms that could trigger an escalation in the war.

In a guest essay published in The New York Times, Mr Biden confirmed he had decided to “provide the Ukrainians with more advanced rocket systems and munitions that will enable them to more precisely strike key targets on the battlefield in Ukraine”.

Any weapons system can shoot into Russia if it is close enough to the border.

The aid package due to be unveiled on Wednesday would send what the US considers medium-range rockets, which can generally travel about 45 miles.

Senior administration officials speaking on condition of anonymity ahead of the official announcement said Ukrainians had assured US officials they would not fire rockets into Russian territory.

They said the systems would, however, give Ukrainian forces greater precision in targeting Russian assets inside Ukraine. The expectation is that Ukraine could use the rockets in the eastern Donbas region, where they could both intercept Russian artillery and take out Russian positions in towns where fighting is intense, such as Severodonetsk.

Severodonetsk is key to Russian efforts to capture the Donbas before more Western arms arrive to bolster Ukraine’s defence.

The city 90 miles south of the Russian border is the last pocket of land under Ukrainian government control in the Luhansk region of the Donbas.

Mr Biden said in his New York Times essay: “We are not encouraging or enabling Ukraine to strike beyond its borders. We do not want to prolong the war just to inflict pain on Russia.”

He also used the essay to allay fears over nuclear attacks, while issuing a warning to the Putin regime.

“I know many people around the world are concerned about the use of nuclear weapons,” he said.

“We currently see no indication that Russia has intent to use nuclear weapons in Ukraine, though Russia’s occasional rhetoric to rattle the nuclear saber is itself dangerous and extremely irresponsible.

“Let me be clear: Any use of nuclear weapons in this conflict on any scale would be completely unacceptable to us as well as the rest of the world and would entail severe consequences.”

The rocket systems would be part of Pentagon drawdown authority, so would involve taking weapons from US inventory and getting them to Ukraine quickly.

Ukrainian troops would also need training on the new systems, which could take at least a week or two.

The HIMARS is mounted on a truck and can carry a container with six rockets.

While it can launch a medium-range rocket, it is also capable of firing a longer-range missile, the Army Tactical Missile System, which has a range of about 190 miles but is not part of the plan.

Since the war began in February, the US and its allies have tried to tread a narrow line by sending Ukraine weapons to fight off Russia but stopping short of providing aid that will inflame Mr Putin and trigger a broader conflict that could spill over into other parts of Europe.

Peter Kay in tears as he gets standing ovation at start of comeback gig
Obama mocks Herschel Walker’s vampire remark
‘Playing fast and loose with people’s Christmas plans’: RMT criticised as fresh rail strikes are announced
Royals’ overshadowed US trip to end with Biden meeting and Eilish at prizegiving
Prince of Wales announces winners of Earthshot Prize – here are the five who scooped £1m