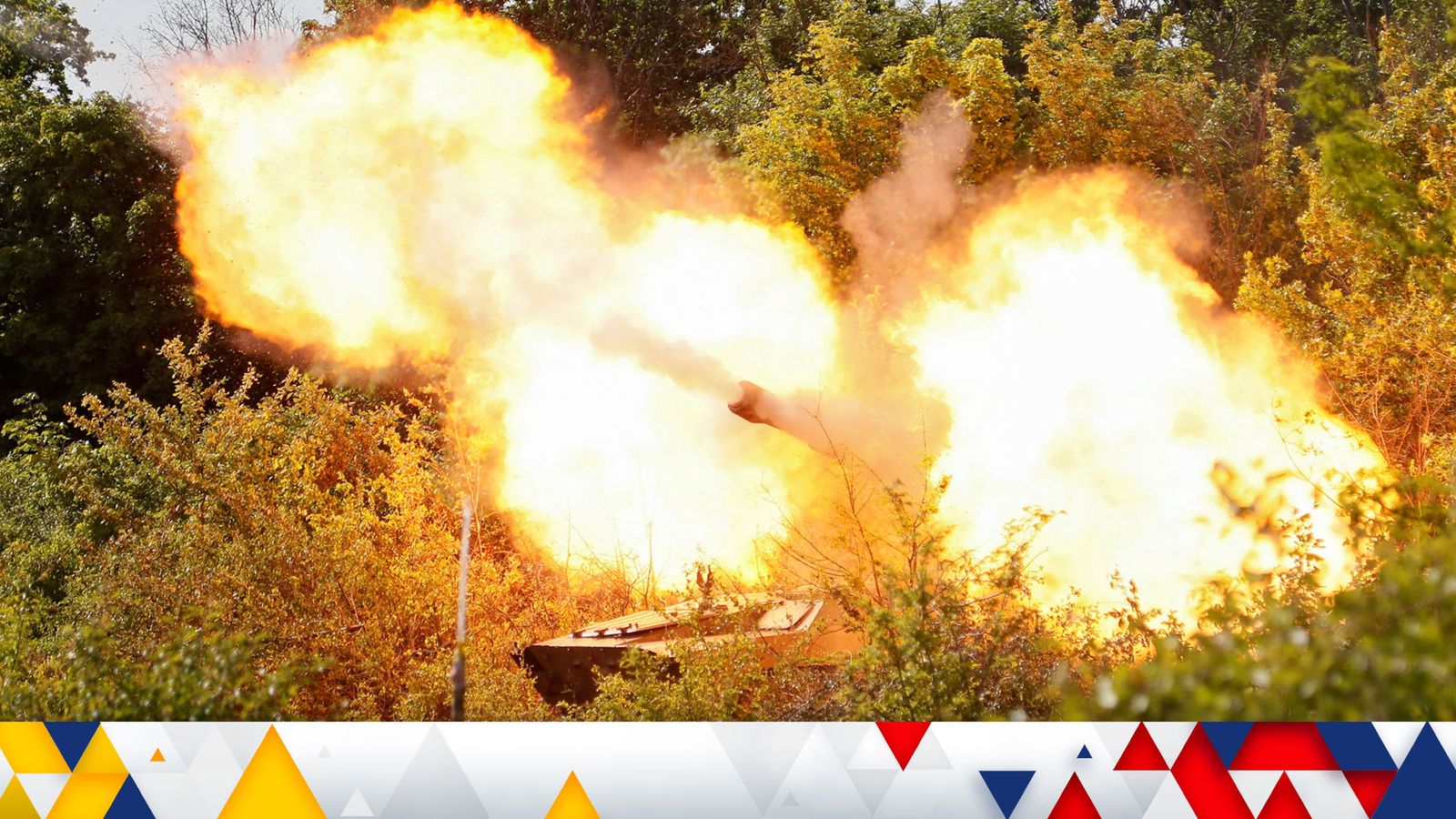 Russian troops now control “around half” of the Ukrainian city of Severodonetsk, an official has said, with British intelligence warning “gains are being held”.

Ukrainian soldiers are fighting to retain control of the strategic city, but the evacuation of civilians is not currently possible, Oleksandr Stryuk, the head of the city’s administration, added.

“The city is still in Ukrainian hands, and it’s putting up a fight… (but) evacuations are not possible due to the fighting,” he told Ukrainian television.

Russia is focusing on “liberating” the eastern Donbas region as part of its “special military operation” after facing stiff Ukrainian resistance in the north.

Russian-backed separatists control part of the Luhansk and Donetsk regions which jointly make up the Donbas, and Vladimir Putin wants it entirely in pro-Russian hands.

If his forces capture Severodonetsk, it would give Moscow control of the whole of Luhansk – and would be his biggest victory in the invasion so far.

Yesterday, Russian forces were at the eastern edge of Severodonetsk – and had taken a power station and a hotel. Overnight, they have slowly moved in towards the centre of the city.

Small Ukrainian units which were holding up the Russian advance have had to pull back, with reports suggesting they are moving to the west of the Siverskyi Donets river, towards the city of Lysychansk.

Giving an update from a pocket of resistance that has held back the broader Russian offensive in the Donbas, Serhiy Haidai, the Luhansk governor, told Ukrainian state television there were around 15,000 civilians left in Severodonetsk.

Reporting from the city, Sky’s Alex Crawford found tensions running high among those who chose to stay, with most of its 120,000 people having fled the brutal bombardment by Russian artillery.

Moscow’s main objective likely remains the encirclement of Severodonetsk and the closure of the pocket around Ukrainian forces in Luhansk Oblast, said the UK’s Ministry of Defence (MoD).

“Heavy shelling continues, while street fighting is likely taking place on the outskirts of Severodonetsk,” it said in its latest Twitter update. 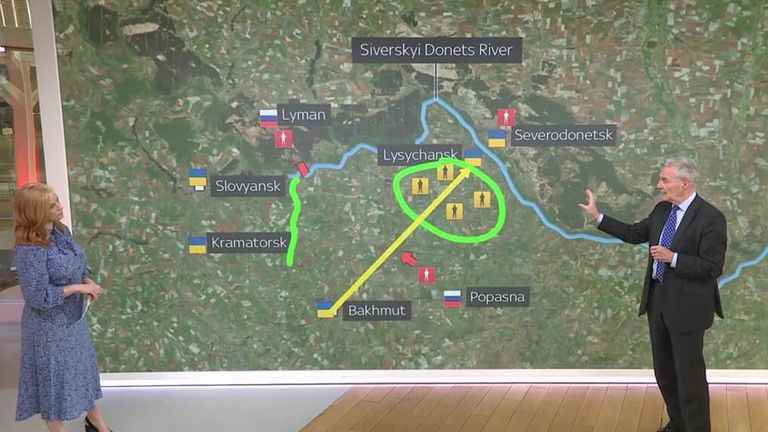 Russian gains ‘are being held’

“Progress has been slow but gains are being held,” the MoD added.

“Routes into the pocket likely remain under Ukrainian control. Russia has achieved greater local successes than earlier in the campaign by massing forces and fires in a relatively small area. This forces Russia to accept risk elsewhere in occupied territory.”

It said: “Russia’s political goal is likely to occupy the full territory of Donetsk and Luhansk Oblasts.

“To achieve this, Russia will need to secure further challenging operational objectives beyond Severodonetsk, including the key city of Kramatorsk and the M04 Dnipro-Donetsk main road.”

Sky’s Alistair Bunkall, who is in the Ukrainian capital Kyiv, said the “street-by-street” battle for Severodonetsk could be heading into its final hours and days.

“If Russian forces successfully capture the city, and that’s looking likely, they will be able to claim control of the entire Luhansk region – their biggest victory in the three-month conflict to date.”

Severodonetsk is turning into “another Mariupol”, according to security analyst Professor Michael Clarke.

However, the push there has weakened Russian forces elsewhere – in Kharkiv, further north, the country’s second largest city, and also in Kherson in the south-west, towards Mykolaiv, the gateway to the strategic Black Sea port city of Odesa.

The port city of Kherson was one of the first in Ukraine to fall under Russian control.

“They are clearly putting the Russians under pressure in Kherson, which from the Ukrainian point of view will give the Russians something else to worry about while they are pushing on in Severodonetsk, because if they are losing ground in Kherson they would have to divert forces away to do something about that,” said Professor Clarke.

Other key developments:
• A Ukrainian teacher who spent 65 days sheltering underground with her six-month-old baby in the besieged Azovstal steelworks has spoken of life in the last outpost of Ukrainian resistance in Mariupol
• Russia’s defence ministry says its forces have downed a Ukrainian Su-25 fighter jet in Ukraine’s Mykolaiv region and bombed a radar station and two ammunition depots in eastern Ukraine
• A ship has left a port in the besieged city of Mariupol for the first time since Kremlin forces captured the region and is heading east to Russia, Interfax news agency reports, citing the Russian-backed separatist leader of the Ukrainian breakaway region of Donetsk
• Belarus will conduct military mobilisation exercises in June and July near the Ukrainian border, according to state news agency BelTA

The battle for the Donbas continued as the EU agreed to ban around 75% of Russian oil imports.

The embargo covers Russian oil brought in by sea, but has a temporary exception for imports delivered by pipeline to appease Hungary and other countries concerned about the economic impact of a full ban.

Hungary gets more than 60% of its oil from Russia and relies on crude that comes from the Soviet-era Druzhba (“Friendship”) pipeline.

Man dies after being shot by dog
‘I fell deeply in love with this project’: Eva Green gives evidence in lawsuit over collapsed film
Sources: Chargers hiring Kellen Moore as OC
Microsoft’s forecast suggests gloomy tech environment will continue
Twitter accused of being behind on rent once again – and this time, it involves King Charles