The horizon in Lysychansk is now crowded with plumes of smoke from recently exploded shells.

As we drive into the city in eastern Ukraine, another has just landed and is billowing out black, choking smoke from what looks like the middle of a group of homes.

The streets look markedly devoid of life compared to the last time we were here just a day or two earlier.

It’s shocking how quickly the situation has dived. And that is really saying something about a city where life has been utterly grim for three months now.

They’ve had no electricity or running water during most of that time and they’ve had the daily torture of seeing and hearing Russian troops bombard and smash their way into their twin city of Severodonetsk with an increasingly savage determination.

But somehow it seems to have got worse.

“We just want this all over,” Yelena says to us as she sits on the step outside her apartment.

We tell them there have been videos on the internet purporting to show Chechen fighters in the centre of Severodonetsk boasting of taking the city.

The fighters have filmed themselves smiling and greeting residents there as they reassure them they have “liberated” the city.

Read more: Ukraine war: ‘My child has gone and I’m so sad… but he died a hero and I’m proud of him for that’

The people of Lysychansk know they will be next. The twin cities are the last pocket of Luhansk province still under Ukrainian control.

Once they fall, the Russians will be able to claim control over half of the region known as the Donbas in eastern Ukraine.

Luhansk police chief Oleh Hryhorov has been leading a small team who’ve been helping to evacuate those desperate to get out of Severodonetsk.

Most routes are now impassable, so they’ve been trying to get people out on small boats.

“We’ve had two boats destroyed already,” Oleh tells us. “Every time they see we have another route, they shell.”

He shows us the armoured truck which had been used to evacuate people the day before.

The front windscreen has a huge hole in it where shrapnel from a shell pierced it.

French journalist Frederic Leclerc-Imhoff, who was there to cover the evacuations, sustained grave injuries from flying shrapnel and died.

Read more: How Putin’s invasion is causing a worldwide food crisis – and what can be done 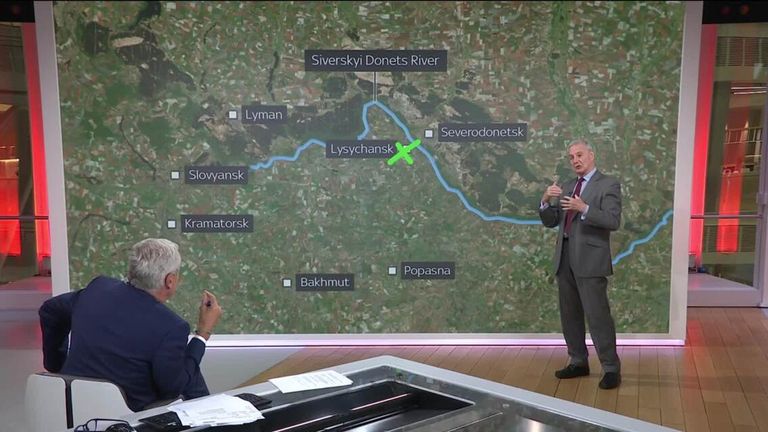 The police believe the truck was deliberately targeted after “collaborators” tipped off Russian forces.

They’ve rounded up between 30 to 40 collaborators, the police say, who have guided rockets and missiles in on their neighbours and fellow residents.

“They’re murderers,” Oleh says. “This is not war on the frontline, this is war with civilians and the town and they destroy all life.”

He says Lysychansk is not safe now.

“I advise you not to be here,” he says. But yet again he and his fellow police insist the twin cities will not be taken.

But from where we’re standing, on the brow of the hill overlooking Severodonetsk, it’s difficult to see how they’re going to be able to hold on. The Russian forces are said to have control of at least half of the city now.

The Ukrainians seem unable to stop the Russians who’re advancing on three fronts in the Donbas.

They’re pushing on flanks in the south, east and from the north towards the city of Sloviansk, and there’s been a dramatic uptick in attacks in Sloviansk over the past 48 hours. 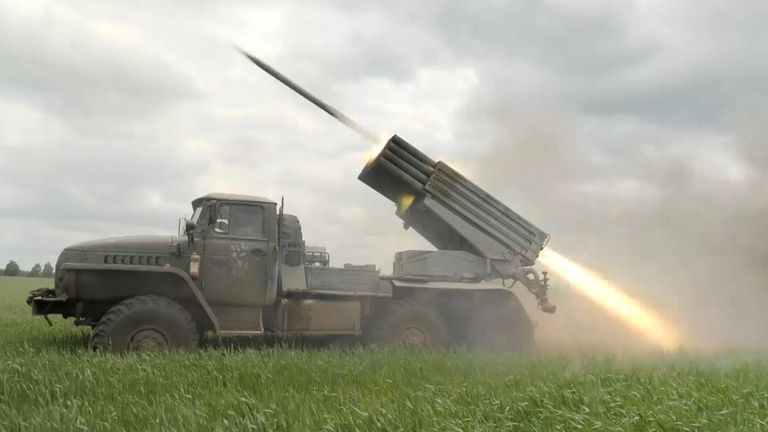 On the frontline with 93rd Brigade

The windows and frames of our accommodation shook as the city was attacked overnight.

We stood at the back of the building and watched the red glow of fire as homes and apartments burned and lives were upended. By morning, the impact was clearly extensive wrecking at least three apartment blocks.

Taking Sloviansk would be a huge symbolic victory for the Russians: it was first captured by pro-Kremlin fighters briefly in 2014 but then taken back swiftly by the Ukrainians.

They don’t want to lose it again, but the overnight attacks are an indication of just how savage this fresh battle is in the Donbas is.

So many in the Donbas are weary of war. They don’t want a divide – they just want the brutality to stop.

Yudmela tells us: “I just want peace. I just want them to leave us alone.”

But it doesn’t look like that is happening anytime soon.