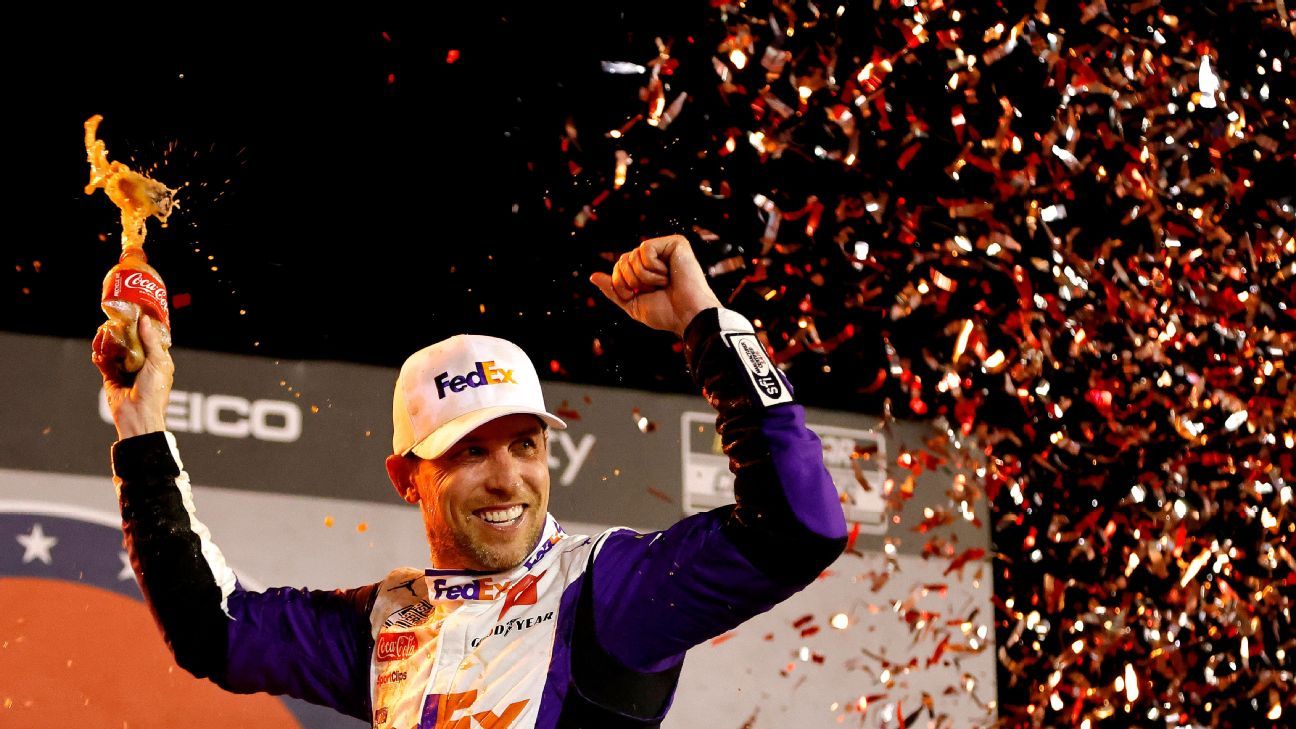 Hamlin won for the 48th time in the NASCAR Cup Series.

“It is so special,” Hamlin said. “That is the last big one that is not on my resume. We weren’t very good all day but got ourselves in the right place at the right time.”

NASCAR’s longest and most grueling race lasted more than 5½ hours and took 413 laps to complete. There were 18 caution flags, and 16 drivers failed to finish. The race featured a 12-car wreck and a crash that sent Chris Buescher‘s car flipping over five times before stopping upside down.

Defending race champion Kyle Larson appeared ready to win the race in regulation before Chase Briscoe crashed trying to pass him with two laps to go in regulation.

In the overtime period, Larson had the inside lane on the restart, but Austin Dillon got a push from the second row and soon was running four wide along with Larson, Hamlin and Ross Chastain.

A crash ensued involving several cars, including Larson and Dillon.

“I got a little loose and tried to make it stick,” Dillon said. “It didn’t quite work out there. I had to do what I had to do to win the race given where we are in points. We had a shot there to bring home another 600.”

On the next restart, Hamlin took the lead and held off Busch for the win. Kevin Harvick finished third, and Briscoe was fourth.

There was a huge wreck on Lap 192 when Ryan Blaney, who won last weekend’s All-Star Race, got too low on the apron on the bottom of the track and spun back up the track. That started a chain reaction that caught up 12 cars, sending some of NASCAR’s top stars — Kurt Busch, Brad Keselowski, Bubba Wallace, William Byron and Chase Elliott among them — behind the wall for good.

Elliott led 93 laps before the crash and appeared to be the car to beat.

“It’s chaos out there,” Byron said. “You can’t drive the car the slightest bit sideways or you’re wrecked. So, if somebody gets a little bit sideways, then we all wreck. It either takes out other people or they spin to the infield. Just chaos.”

Said Kurt Busch: “I think I hit about 15 different things.”

Blaney said the wreck occurred when he got too low.

“Gosh, I hate it,” Blaney said. “Makes you feel pretty dumb for doing that. I hate it, tore up our car and a handful of others. … I just didn’t know where I was at and just made a mistake.”

Buescher’s No. 17 Ford then flipped five times before landing on its roof after a collision on the frontstretch with Daniel Suarez. Buescher had to wait until track officials flipped his car back over before he could get out of the car.

He walked away from the crash.

“I guess a tire just ripped off and sent us flipping,” Buescher said. “I have been upside down before, but this was a bit more painful than the Talladega roll.”

The NASCAR Cup Series heads to the St. Louis area next Sunday.

Aptera’s clever new community funding program prioritizes your SEV delivery the more you invest
At least one dead and several injured in Spanish church ‘terror attack’ stabbing
‘I was sad for the institution’: Nancy Pelosi speaks out about McCarthy speaker vote
Zelenskyy ‘thankful’ for extra tanks but warns quantity and delivery time is ‘critical’
Ryan Reynolds has talked more Wrexham than Deadpool these days. He’s OK with that.