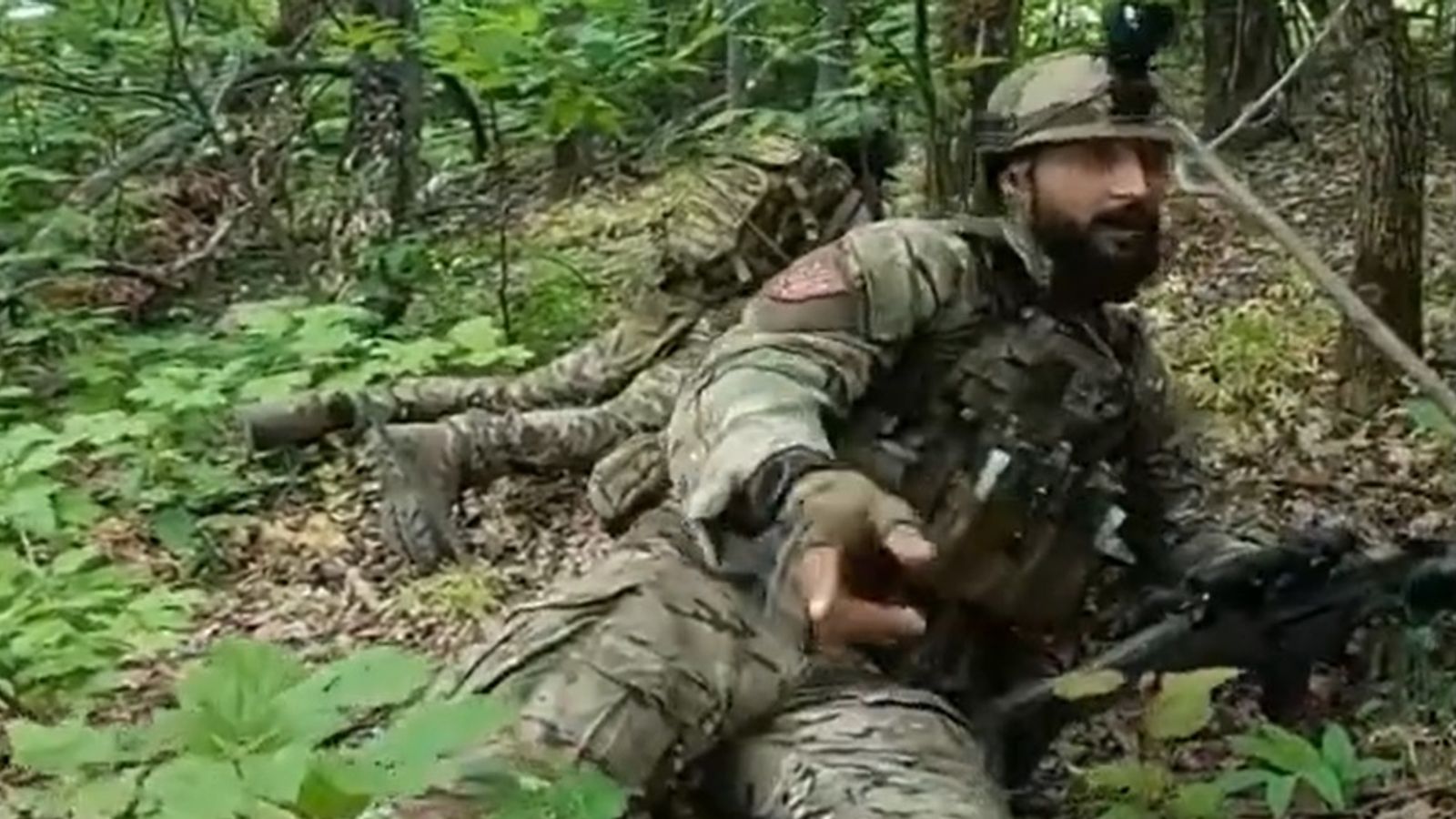 Dramatic video footage has shown the son of a Tory MP fighting in Ukraine – including an attack on a Russian troop carrier and the rescue of a wounded comrade.

Ben Grant is heard screaming “We’ve got to move now or we’re gonna die!” as he and his band of foreign fighters help drag one of their number to safety as shots ring out around them.

The clip – first reported by The Daily Telegraph – shows him and his unit under constant fire as they treat former Grenadier Guardsman Dean Arthur’s leg with a tourniquet during terrifying scenes on the ground in Ukraine.

More footage shows the unit conducting a daring ambush on a Russian troop carrier with a rocket launcher.

Mr Grant, 30, son of Conservative MP Helen Grant, is a former Royal Marine who arrived in Ukraine during the early days of the war.

In one clip, the band of fighters shout encouragement to Mr Arthur as they move through the woods: “Come on Deano! Last bit, keep going! Good man – you moved fast and well there, brother.”

They are thought to have been part of the Ukrainian counter-offensive that pushed Kremlin forces troops out of Kharkiv and, in places, all the way back to the Russian border.

An unknown number of British nationals – both serving military and civilians – are thought to have travelled to Ukraine to support the country’s armed forces.

Foreign Secretary Liz Truss previously said she supports individuals who want to fly to Ukraine to fight “for democracy” but the Foreign Office later said it advises against all travel to the country.

Mr Grant told The Telegraph how his 15-strong unit – made up of British and American volunteers and two Ukrainian translators – had been preparing for an assault on a Russian-held target when they were ambushed.

He said: “I think we must have been spotted by drones beforehand and they had set up their lines… so as we went in the mass firefight broke out where you see (in the video) what we saw.

“We were walking in single file as the contact happened, Deano was at the end of my team, when he went to take a knee… we were shooting, getting our heads down and shooting them. I was terrified but driven to complete my most important goal, which at the time was getting him and my team out of the danger.

“What was so scary was being so limited by trying to carry someone, when I can’t pull my weapon up, while there are attack helicopters overhead and tanks firing through the woods. It was unreal – I’ve never experienced anything like that in my life.”

Mr Arthur was taken to hospital in Kyiv, where doctors have saved his leg.

In another clip, Mr Grant can be heard saying “go, go” as he and his group of foreign volunteers creep out of a patch of woods to surprise the Russian armour.

The helmet-cam footage captures the moment one of his comrades fires a rocket at what is believed to be a BTR-80 armoured personnel carrier.

They then swiftly retreat, one of them saying “it’s facing towards us” and “fall back, fall back”, as shots are heard around them.

Separate footage – apparently taken by a drone – appears to show the troop carrier being hit by the rocket and fleeing the scene, smoking as it goes.

Secondary explosions on the armoured vehicle are then pictured – possibly ammunition exploding as a result of the rocket hit.

Christopher Eccleston: ‘Patriarchy cocks everyone up… It did its damage to me too’
Quick Charge Podcast: December 8, 2022
Eighth child dies after Strep A infection – as parents warned to watch out for symptoms
Christmas travel hit by new strikes as Border Force set for airport walkouts
England cruise past Senegal to set up quarter-final clash with World Cup holders France