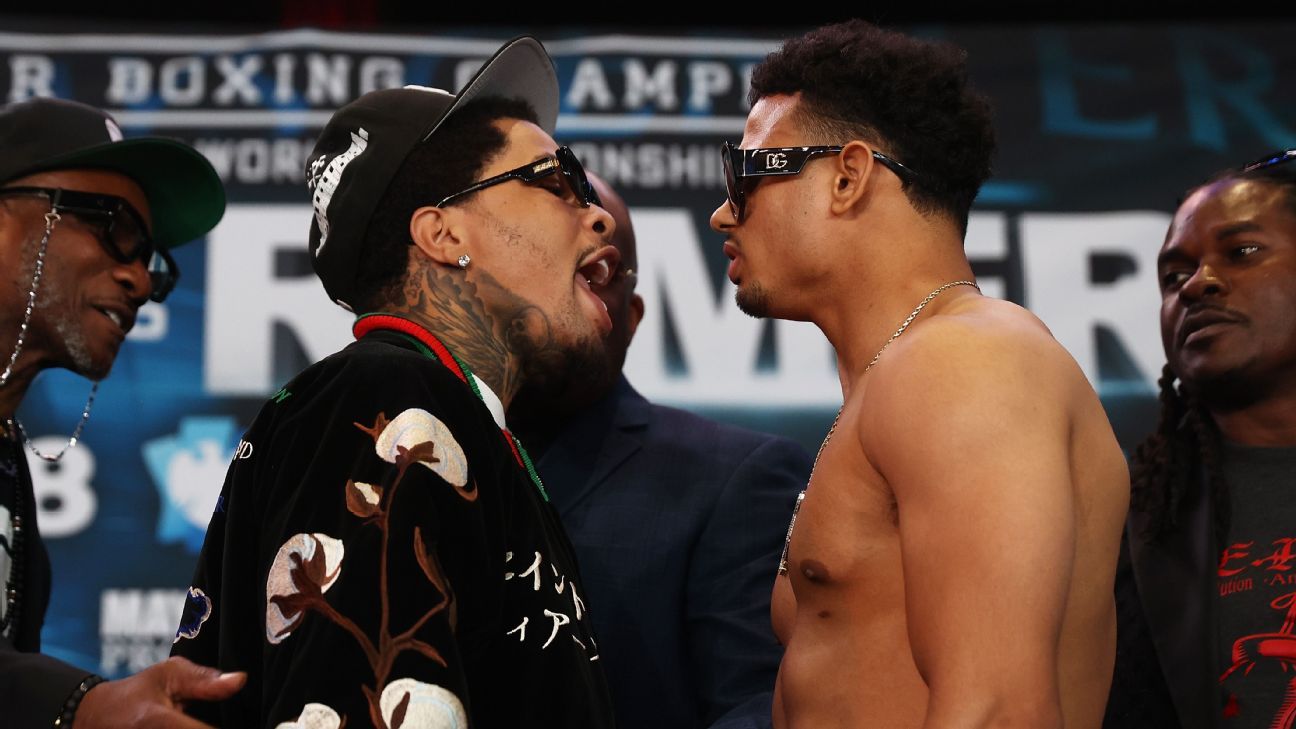 Davis (26-0, 24 KOs), 27, of Baltimore, is coming off a decision victory over tough contender Isaac Cruz in December. It was Davis’ first victory by decision since 2015. Since that fight he had scored 16 KOs, eight of them inside Round 3, including wins over Mario Barrios, Leo Santa Cruz, Yuriorkis Gamboa and Jose Pedraza.

Will Davis’ experience and exceptional technique be enough to overcome the unusual style and aggressiveness of Romero?

This fight is going to be fun to watch because you have two guys with punching power. On top of that, they don’t like each other at all. Romero is not afraid of Davis, and that’s about a quarter of the battle. He won’t go in there and let the hype derail him from doing what he needs to do. Cruz wasn’t afraid of Davis either, and he gave Davis trouble in their fight.

As far as styles go, it’s aggression vs. aggression — but different kinds of aggression. Romero has more of an emotional aggressiveness — he fights with emotions even during the ring walk, or during the fighter’s introductions when he’s pounding his gloves. He feels it in there, feels the pressure and fights like it, too. When the fight starts he comes out aggressively, very quickly, swinging big punches with intentions of hurting his opponent early.

I think both fighters possess that kind of cruelty, but Davis, as cruel as he is in the ring, is more of a surgeon in there. He’s efficient, he’s accurate, and he is very sound technically and tactically. Davis is a short fighter with punching power. He could be the hardest puncher at 135, to be honest with you.

There’s some sort of an argument in boxing of a shorter puncher that has to punch up against a taller puncher as compared to a leaner puncher that has to punch down — who punches harder? For me it’s the shorter guy punching up, and Davis is an example of that, standing at 5-foot-5½, with a 67½-inch reach. He has been dominant inside the ring with 26 wins, with 24 coming by knockout. He’s also a southpaw, meaning he’s used to fighting against right-handed opponents like Romero. And he can hurt you with either hand. Davis has an uppercut that is out of this world and probably the best punch in his toolbox, in my opinion. He has speed, tremendous punching power, great technique, and is defensively sound. There’s a lot of things you have to take into consideration when you fight a guy like Davis.

What Romero does well

As I said before, he has no fear. In this business, when you are afraid and you allow your nerves to get the best of you, you can’t perform. That’s not in Romero’s nature. He truly believes that he can win and he believes that he can knock out Davis … and I think that’s the only way he can beat him.

What Romero brings to the table is tenacity, some awkwardness inside the ring where he is unorthodox with his style. He doesn’t do everything perfectly, but he’s a type of fighter that can be off balance and still be able to punch. And that makes him dangerous. There are not many guys in boxing that can be off balance and still punch with power. Romero seems to have that ability. He’s also spontaneous with his attack, and he can explode at any moment with his favorite punch, the left hook. I believe the left hook is the punch that Davis will have to be wary of. And in boxing the left hook can set up the right hand behind it.

Romero is physically strong, a bit taller than Davis, but he also has short arms, with a 68-inch reach. But he’s explosive. When Davis feels like he may be safe, he’s not safe. The only time when he’s going to be really safe is when he’s sitting in his corner between rounds. Because all it takes is a split second for you to not do something right and you have an opponent in front of you so strong that can punch from different angles and has a different technique you are not accustomed to. He can hurt you and turn your lights out.

Davis has fought the better opposition, and I don’t think Romero has had the time to really hone his skills the right way. I know different fighters have their own technique — and he has his own as well — but Romero hasn’t had enough fights to be able to understand and develop his skill set, with this being only his 15th professional fight.

The fact that Davis has fought top-notch competition, he’s felt that kind of pressure and resistance in the ring against top-quality opponents and contenders. And then you have a guy like Romero that hasn’t been tested in that fashion. He doesn’t really know what he’s capable of doing. The one thing he knows is that he’s tough, and he’s been rocking guys in the gym and has been gaining confidence. But once you get under those bright lights, wearing 8-ounce gloves with someone in front of you that’s a prolific puncher and a lot more technical than you are that has had that experience and that has a better resume than a Romero, of course that’s going to be a huge factor in this fight.

The experience factor heavily favors Davis. He’s developed and honed his skills and doesn’t just depend on his punching power. We saw him fight Cruz off his back foot, and for fighters that solely depend on punching power, a lot of times they fall in love with it and they don’t develop other types of skills. That’s not the case here. He can box, and he also knows how to take you out.

There’s a lot Romero will have to deal with that is new to him on Saturday night.

Davis is going to have a lot of fun in this fight because Romero makes a ton of mistakes, and Davis, being the great technical fighter that he is, is going to see those holes and capitalize on those mistakes. “Tank” can wear him down early on. The later this fight goes, as it gets to the fifth, sixth, seventh, eighth round or later, that’s where you are gonna see the quality of Davis, where his experience and technique completely take over this fight. Just from him being patient, by being technically sound and by being more economical with his offense.

Will that uppercut of Davis be there? Yes. Will that straight left hand down the middle be there? Yes. Will the right hook be there? Yes. As the fight goes on, I see Romero getting frustrated because of the defense of Davis. So, Romero is going to push the initiative even more and try to put more pressure on Davis, which will eventually open him up to get caught with a nasty counter that can put him on the canvas. I think Romero will hit the canvas several times in this fight — or it could be just one time where he goes down and stays there. This fight is going to be fought as long as Davis wants it. I don’t see it going the distance because Romero makes too many mistakes and doesn’t have too much experience to understand how to win this particular fight.

I think this fight is way too soon for Romero. There are levels to this game and, as I preach this all the time, if you don’t choose your time wisely on when you are going to step up, it can end very badly and quickly for you. Romero has little chance of winning this fight, and that’s a puncher’s chance.

Technique. I can’t stress this enough. We talk about the jab, we talk about footwork, and yes, those are very important things in boxing. But technique is everything. Technique is timing and speed, because when you think about it, if you have poor technique, your speed is not going to be there, your timing is going to be off. How you do it, the way you throw your punches, the way you place your feet, that’s all technique. And that’s going to be the X-factor in this fight. “Tank” has just supremely better technique than Romero, and it’s going to show.

This fight could be the easiest fight of Davis’ career. I don’t see him having any problems figuring out this bully. Because that’s what Romero is, he’s a bully inside the ring.

With Romero not having great technique and not having the experience of going 12 rounds a lot, his power will start diminishing over time in this fight. Romero hasn’t knocked out anybody late, past the seventh round. Davis has — that’s his specialty. He can knock you out in the first round, he can knock you out in the 11th, 12th. Davis reads you and that comes, again, with experience. You see the same patterns and you pick up on those things. Romero comes straight down the middle when he attacks, he comes wide, allowing Davis’ right hand to land and be nasty. I’ve seen the physique of Romero and everybody is going, “Oh, he’s strong, he’s big, Tank better be ready.” Muscles alone don’t win you fights. It doesn’t matter how big and strong you are. What happens when you are getting tagged with big shots or when you can’t get where you want to get to? Davis can sit back, dominate from the outside, walk Romero into punches, have the easiest payday of his life and have a fun time being patient and making Romero pay every time he makes a mistake.

“Tank” by KO. If Davis comes out blazing and aggressive, Romero will have a chance to catch him with something hard in between punches and has a chance to win it. I made this frog analogy the other day during the broadcast and it works here, too. If you put a frog in a pot of boiling water, the frog’s going to jump out, fight back. But if you put the frog in lukewarm water and you slowly crank up that heat, the frog is going to swim around and think, “Feels good in here,” and sooner than later it will be frog soup. That’s what I see in this fight. Frog soup. It could be late, but I’m going to say in the seventh, eighth round. Davis will break him down and stop him. Nasty stoppage.

The Bet, by Ian Parker

Both Davis and Romero carry tremendous knockout power, and with this being a rivalry fight, I do not expect this fight to go the distance. It may come as no surprise that Davis is the heavy favorite at -1300, but at that number it is way too pricey to take him on the moneyline. I like Davis to win this fight by TKO. Davis is very calculated and his accuracy with his power is unbelievable, as demonstrated in past fights.

Romero has a very wild and unpredictable style that has caused problems for opponents in the past, but against a fighter as skilled as Davis, that wild style will eventually cost him and leave him open to get hit. If you give Davis an opening he will take it, and more than likely leave you sleeping on the canvas. Bet: Davis to win via TKO