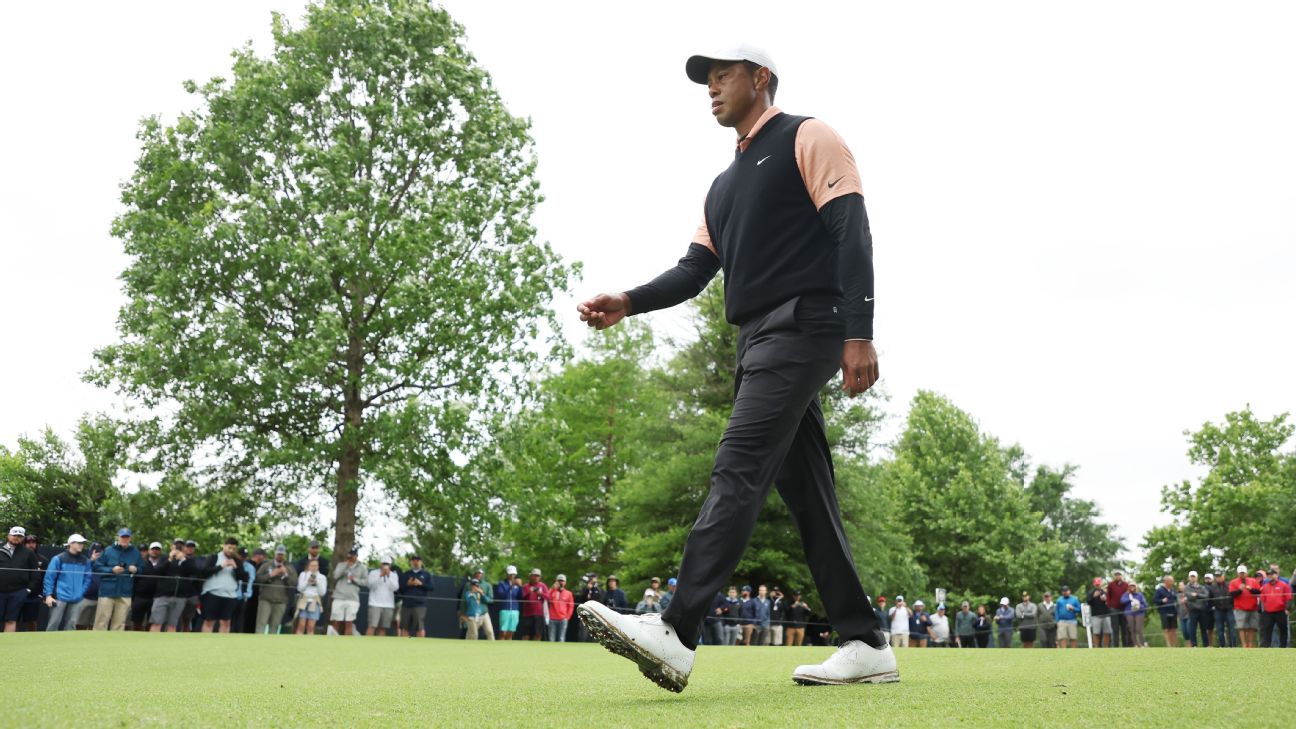 TULSA, Okla. — Justin Thomas‘ long wait to win another major championship is over after he defeated Will Zalatoris in a playoff to win the 104th PGA Championship at Southern Hills Country Club.

Zalatoris will have to wait again for his first PGA Tour victory, along with Mito Pereira, whose costly mistake on the 72nd hole on Sunday cost him a chance to be the first man from Chile to win a major.

With two majors in the books, and the next one not coming until June 16-19 at The Country Club in Brookline, Massachusetts, it’s a good time to look at the sport’s biggest stars and where they stand at the halfway point of the major season.

It’s an absolute miracle that Woods, 46, is even playing competitive golf after nearly losing his right leg in a car wreck on Feb. 23, 2021. When the 15-time major champion unexpectedly returned at the Masters in April, the golf world had grand illusions about him contending as soon as he came back.

Six weeks later, it’s clear that Woods has plenty of healing and work left to do before he contends again — if that even ever happens. Give him plenty of credit for making the cut at both the Masters and PGA Championship. But his surgically repaired right leg and foot couldn’t hold up over 72 holes, forcing him to withdraw before the final round at Southern Hills.

Andy North discusses Tiger Woods withdrawing from the PGA Championship after Round 3.

And that’s a problem.

It’s time for Woods and his team to assess what they want out of the rest of this season. Should he skip next month’s U.S. Open and focus on the 150th Open Championship at St. Andrews in July? Should he play in any tournaments until he has had more time to recover? If this is as good as it’s going to get for Woods, is it even worth the pain? He doesn’t have anything else to prove.

Remember when Koepka would show up and tell everyone he was going to win a major — two days before the tournament even started? Then he would go out and do it.

It hasn’t been that way this year for the four-time major champion. He missed the cut at the Masters and tied for 55th at Southern Hills. Koepka, 32, has had knee and hip injuries in recent months. He has just two top-10s in 14 tour starts.

The good news at Southern Hills was that he putted very well after struggling mightily at Augusta National. Koepka said he was so mad about his putting that his anger affected his swing, which led to bad ballstriking. Sounds like his game is a mess.

It’s not that DJ is playing bad golf, it’s just that he’s not winning — and hasn’t won on tour in a long time. His last victory came more than 18 months ago, at the 2020 Masters that was played in November because of COVID-19.

Last year, he wasn’t happy with his driver. He likes his new one but is still struggling off the tee at times. He tied for 12th at the Masters and missed the cut at the PGA Championship, the third time in the past six majors that he wasn’t around for the weekend.

“I’m starting to see a lot of consistency with the driver, driving it a little bit straighter,” Johnson said. “I think for me that’s the biggest key, just not having the confidence in the driver that I did for a long time. But it’s getting back.”

Time for a reset

Morikawa, a two-time major champion, has played pretty good golf, but just hasn’t won yet in the 2020-21 season. His last victory was at The Open at Royal St. George’s in July. He was solo fifth at the Masters and tied for 55th at the PGA Championship.

Like a few other young players, Morikawa’s work around the green leaves something to be desired, but he’s one of the game’s best ball strikers and an improving putter.

“I want to go out and win,” Morikawa said. “Not having a win this year, I want to get back out there. I want to get back in the winner’s circle. I’ve seen pieces and a lot of the prep this year has felt good, which is why it’s frustrating. Just have to be patient, go back to what I was doing in the past and start playing well.”

Rahm won at the Mexico Open earlier this month, so it’s hard to be too critical about his play as of late. But that was his first victory in nearly 11 months (his previous one was the 2021 U.S. Open at Torrey Pines), and he didn’t finish great at the first two majors. He tied for 27th at the Masters and tied for 48th at the PGA Championship.

The Spaniard is driving and striking the ball as well as anyone on tour. He ranks first in shots gained off the tee and tee to green and is third in shots gained total. According to ESPN Stats & Information research, he has gained strokes off the tee in 42 straight measured starts, tied for the longest streak since 2004.

“I think my iron game felt better last year,” Rahm said. “Statistically in the sense of what, I’m hitting more greens maybe? Yeah, driving is better. I haven’t changed anything personally. I think that’s more so the driver than me. Last year’s driver was great; this one is even better. It feels just as good, and I believe it’s a little bit more forgiving. That’s why I believe my ball speed has been up a little bit.”

Hovland won at Mayakoba in November and finished in the top 25 in six of his 13 tour starts. His form hasn’t been great since he tied for ninth at the Players. He tied for 27th at the Masters and tied for 41st at Southern Hills.

Remarkably, Hovland, who is ranked No. 6 in the world, is dead last on the PGA Tour in strokes gained around the green (210th). His chipping wasn’t much better this past week. That part of his game has to improve if he’s going to contend at majors.

Cantlay is the fifth-ranked player in the world and has won five times since October 2020, most by any player on tour. But his performance in majors the past couple of seasons hasn’t been great.

Cantlay has just one top-10 finish in 18 major starts as a pro and missed the cut in three of his past six starts, including this past week at Southern Hills, where he was 11 over in 36 holes. He hasn’t had a top-10 in a major since tying for third at the 2019 PGA Championship.

Cantlay, a seven-time winner on tour, was asked last week if his major record bugged him.

‘”Bug me’ isn’t quite the right term,” he said. “But definitely something I’m really earnest on trying to fix.”

With the way JT has been hitting the ball recently, it was only a matter of time before he won. And he was too good not to claim another major after waiting five years between his PGA Championship titles.

Thomas rallied from a 7-shot deficit on Sunday, which tied for the largest 54-hole comeback in PGA Championship history. It was the third-largest rally in any major championship. Only Paul Lawrie, who came back from 10 shots in the final round of The Open in 1999, and Jack Burke Jr., who climbed from 8 shots back at the 1956 Masters, had bigger ones.

The world No. 1 isn’t going to win every week, but you have to sort of wonder if his epic heater isn’t nearing an end. After winning four times in six starts this spring, including the Masters, Scheffler tied for 15th at the AT&T Bryon Nelson and missed the cut at the PGA Championship. It was just the third time he’d missed a cut in the past year and the first time since October.

It wasn’t a great week for Scheffler at Southern Hills. He ranked 113th in strokes gained off the tee, 110th around the green and 108th in putting. He’s so much better than that.

The Australian has already won twice this season, including the Players, and is ranked No. 3 in the world. He played in the final pairing on Sunday at the Masters and finished tied for third. His putter let him down at Southern Hills, which is why he finished tied for 13th. He led the field in strokes gained tee to green, but ranked 76th in putting.

McIlroy will be criticized for failing to get it done at another major. It has been nearly eight years since he last won one, and he has had plenty of chances to win another one. He shot 5-under 65 in the first round at the PGA Championship, but followed it up with a 71 and 74. It’s nearly scripted that he’ll play well on Sunday and back-door his way into a top-10, which he did this past week by finishing eighth.

But McIlroy has played exceptional golf this season. He won the CJ Cup in October, finished second at the Masters and fifth at the Wells Fargo Championship. Like Thomas, McIlroy is too good not to win another major.

It seems unfair that Zalatoris hasn’t yet won on the PGA Tour. He is a two-time runner-up at majors; he was also second to Hideki Matsuyama at the 2021 Masters. He has five top-10 finishes in eight majors. Sunday’s playoff defeat to Thomas was the second of his career, after he narrowly missed winning the Farmers Insurance Open at Torrey Pines in January.

Zalatoris is a ballstriking machine and he has to be gaining confidence as a putter. He ranked 10th in the field in strokes gained putting at the PGA Championship. He wasn’t as consistent on the weekend, but he was nearly good enough. That’s a big step in the right direction.

“[I’m] pretty excited where my game is at, for sure,” Zalatoris said. “Like I said earlier, I know I’m going to get one. Just a matter of time.”

After winning the RBC Heritage and finishing second at the Byron Nelson, Spieth teased us into believing that he would finally have a great chance to complete the career Grand Slam by winning the PGA Championship. He shot 2-over 72 in the first round and finished tied for 34th.

In his previous five attempts at completing the career Grand Slam, Spieth had an average finish of 29th at the PGA Championship. This is the third straight time he finished 30th or worse.

Spieth hasn’t played great in the majors (he missed the cut at the Masters), but he’s playing good golf outside of the majors. He didn’t do anything exceptionally bad at Southern Hills — he just didn’t score well.