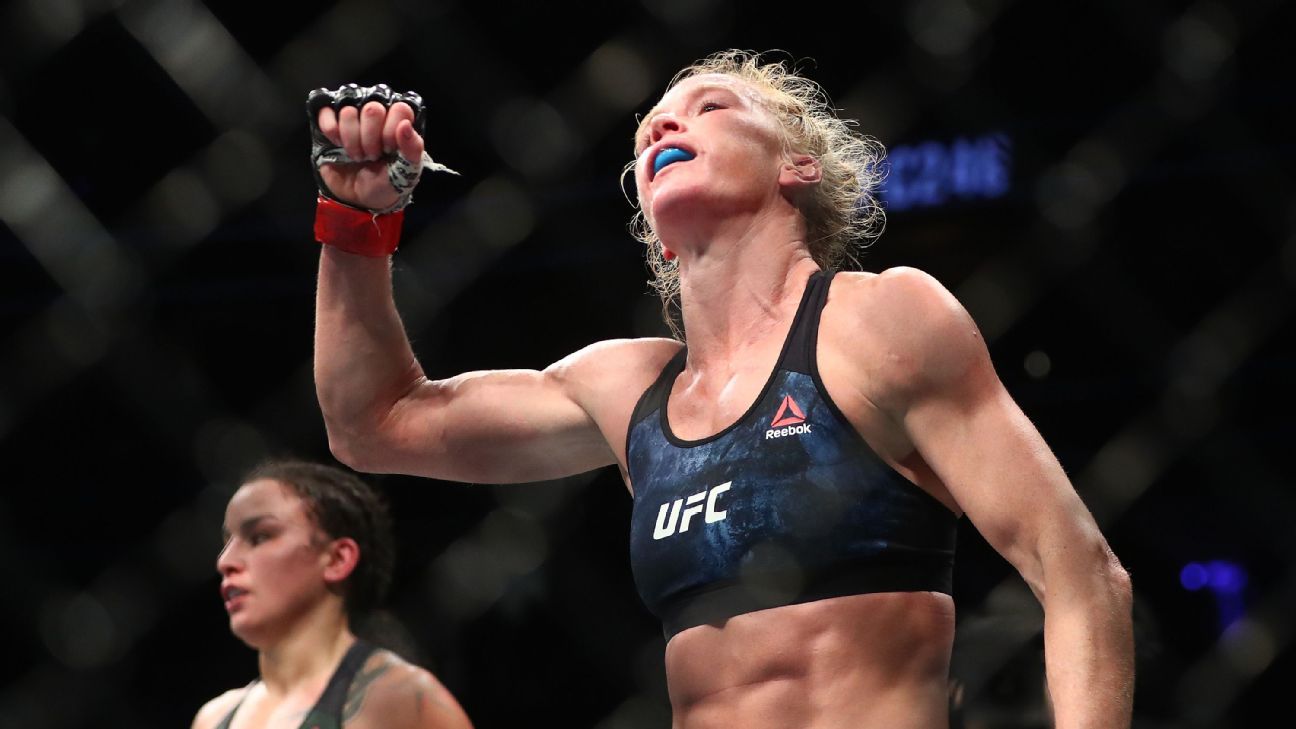 For the first time in nearly 10 years, Holly Holm is thinking about professional boxing.

To be clear, Holm’s primary focus is still very much on MMA and recapturing the UFC bantamweight championship that she won in 2015 and surrendered in 2016. Holm (14-5) faces Ketlen Vieira in the main event of UFC Fight Night on Saturday in Las Vegas. If she wins, she will have won three in a row — and possibly could earn her first UFC title shot since coming up short against Amanda Nunes in 2019.

“If I want to get to the belt, I have to go through Ketlen Vieira,” Holm told ESPN. “She’s probably one of the toughest opponents I could have to get back there. I have to get this right. I have to show what I’m capable of.”

A win over Vieira (12-2) this weekend and a UFC title fight later this year — those are Holm’s immediate goals. But beyond that, what else?

Ever since Holm, 40, retired from professional boxing as a three-division champion to make a complete transition into MMA in 2013, she has rarely talked publicly about boxing. She has maintained a love and appreciation for the sport in which she competed professionally for 11 years but has shown zero interest in a return to the ring.

“I haven’t heard her talk about boxing since her last pro fight,” said Mike Winkeljohn, her coach in boxing and MMA. “In fact, I even think there were a couple fights left in her boxing career where she was done with it. She wanted to move on. After she left, people would still talk about it and try to offer her a comeback fight, and she’d go, ‘Nah. I’m done.’ Her entire MMA career, she’s never thought about boxing.”

Two recent developments, however, have changed that.

In December, Holm (33-2-3, 9 KOs in boxing) was announced as part of the 2022 class of inductees to the International Boxing Hall of Fame. When she is inducted in June, Holm will be one of only six women to have made it into the Hall.

The event hit close to home for Holm. Her manager, Lenny Fresquez, has a long-standing relationship with Taylor’s manager, Brian Peters, and the managers had big plans for the fighters.

“Katie wanted to box Holly right away,” Fresquez said of Taylor’s early-career goals. “We’ve stayed in contact over the years, and I was so happy for them the other night. I know they still want that fight. I called up Holly and said, ‘Fourteen years later, they still want to fight you.’ We’re under contract with the UFC, so we would have to get [president] Dana White involved on something like that. But I think the [chances of Holm boxing again] are pretty good. I think they are pretty darn good.”

Of course, any talk of Holm returning to boxing is premature for the moment — but it also aligns with her reputation as a competitor. Holm dreams big. She has challenged herself throughout her storied career in combat sports, which is why she is the only person to hold major titles in boxing and MMA.

And when her mind wanders to the future — beyond Saturday’s main event — it does so beyond the Octagon.

“I think about doing both,” Holm said. “And my last boxing match, there was a debate if it would be at 135 or 140 pounds. I had already won a title at 140. I wish I would have pushed that [fight at 135] more because I could have been a four-division champion. I had already won titles at 140, 147 and 154 pounds. And we know I can make 135 because that’s what I compete at in MMA. I don’t know if that’s turned into a weird, unfinished business thing for me to go back and win at 135 or what.

“But why not [actively hold titles in two sports]? I think that sounds fantastic.”

If Holm were to return to boxing, she’d be picking back up a standout career in the sport’s history. She never competed in the Olympics because women’s boxing wasn’t an Olympic sport until 2012. She essentially skipped an amateur career and made her pro debut in 2002 at 20 years old. The vast majority of her career took place in her hometown of Albuquerque, New Mexico, with Fresquez serving as her promoter.

“I think her first contract with me was $1,000 per fight, four fights minimum per year, four-round fights,” Fresquez said. “She was just getting started, but everybody else was making $400 per fight. Holly was an instant draw. She had long blond hair, attractive. Fans went crazy for her. The weigh-ins alone would attract 100 to 200 people. And she fought every badass No. 1 contender we could find. Whoever was the best from 140 to 154 pounds.”

Holm left boxing for MMA in 2013 and compiled a 6-0 record before signing with the UFC in 2015. She became the UFC’s 135-pound champion in one of the most memorable performances in the sport’s history on Nov. 14, 2015, knocking out then-undefeated Ronda Rousey in the second round before a record crowd of 56,214 at UFC 193 in Melbourne, Australia.

Holm is not the only one to compete in boxing and MMA, but she has been the most successful. Whether any fighter will ever match her accomplishments in multiple pro sports is a legitimate question to ask. 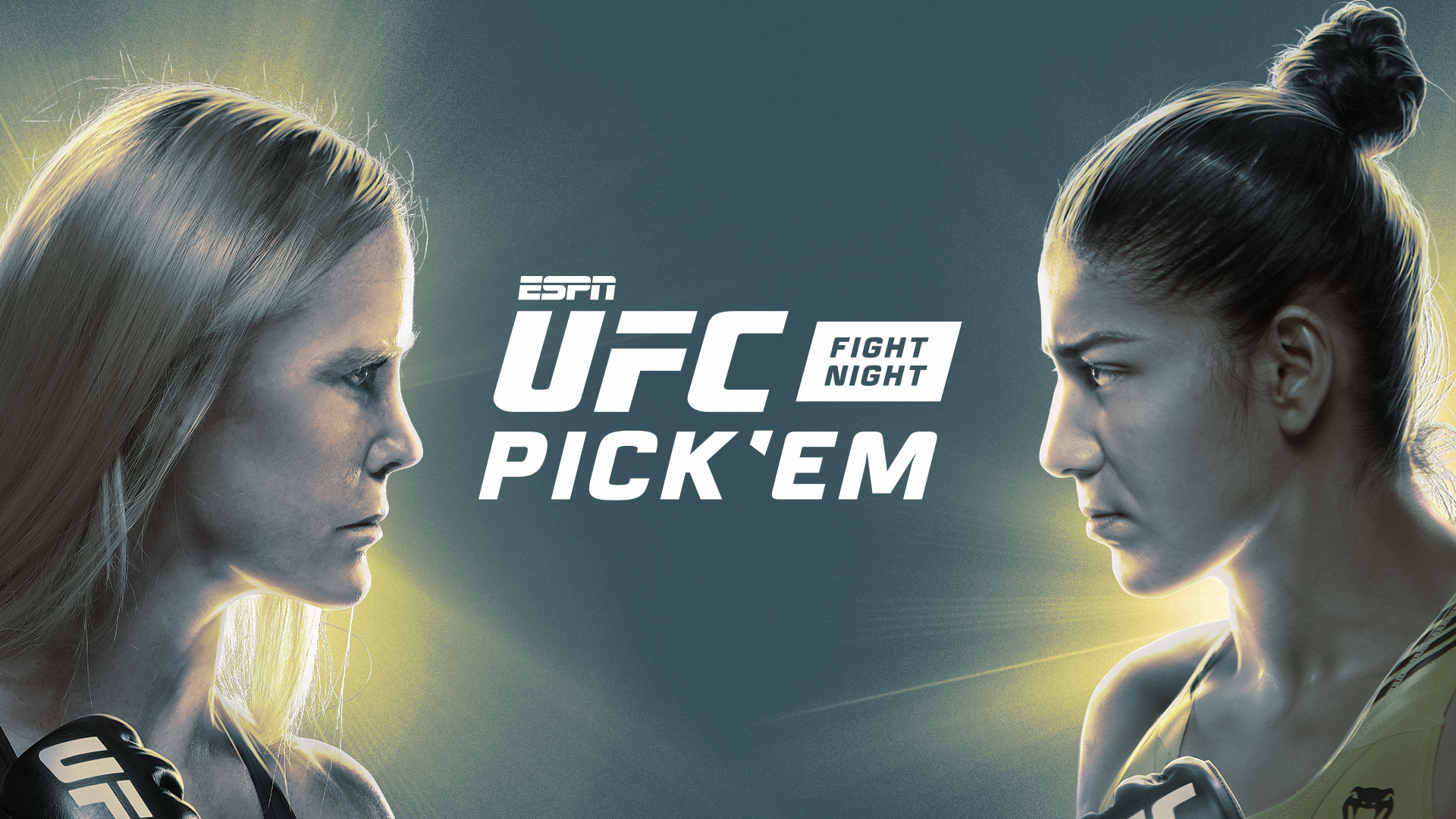 Play for a chance to win a streaming of UFC 275 for FREE! Make Your Picks

“I can’t see anyone doing it at a higher level than she has,” Winkeljohn said, who also coaches two-sport athlete Claressa Shields. “I hope it happens again, because it would mean both sports are evolving, but I’ve seen a lot of boxers come over and try MMA, and they don’t want to put in the time to learn the skill set that is necessary. Boxers spend thousands of hours perfecting their art, and now you have to spend thousands of hours to learn MMA. There just aren’t enough hours in a lifetime to do it.”

Holm is the only one to do it. And quietly, behind the scenes, seeds are being planted for her to potentially do it again. She is not a UFC champion at the moment, but she’s not far away. She is ranked No. 2 in the bantamweight division and faces a legit opponent in Vieira, who is 6-2 inside the Octagon.

This idea of “UFC fighters-turned-boxers” has become a trend lately in MMA. UFC champions Kamaru Usman and Francis Ngannou have expressed a serious interest in boxing, and Conor McGregor infamously fought Floyd Mayweather in 2017 and has explored the possibility of boxing again. So, if Holm were to pursue a boxing match, she’d be fitting into the trend.

“There is a different level of excitement with me going to boxing, because I was already there,” Holm said. “I know Dana White is still proud of what I did in boxing and views me a little differently. Here’s the thing about me going to boxing: I’m not going because, ‘Oh, it’s one fight and it’s a payday,’ or because it’s the thing to do right now. I’m not going for drama.”

Holm’s interest in boxing would be undeniably different, and she’s optimistic the UFC would view it differently. While the focus is still MMA, for the first time in a decade, the door to boxing has been cracked.