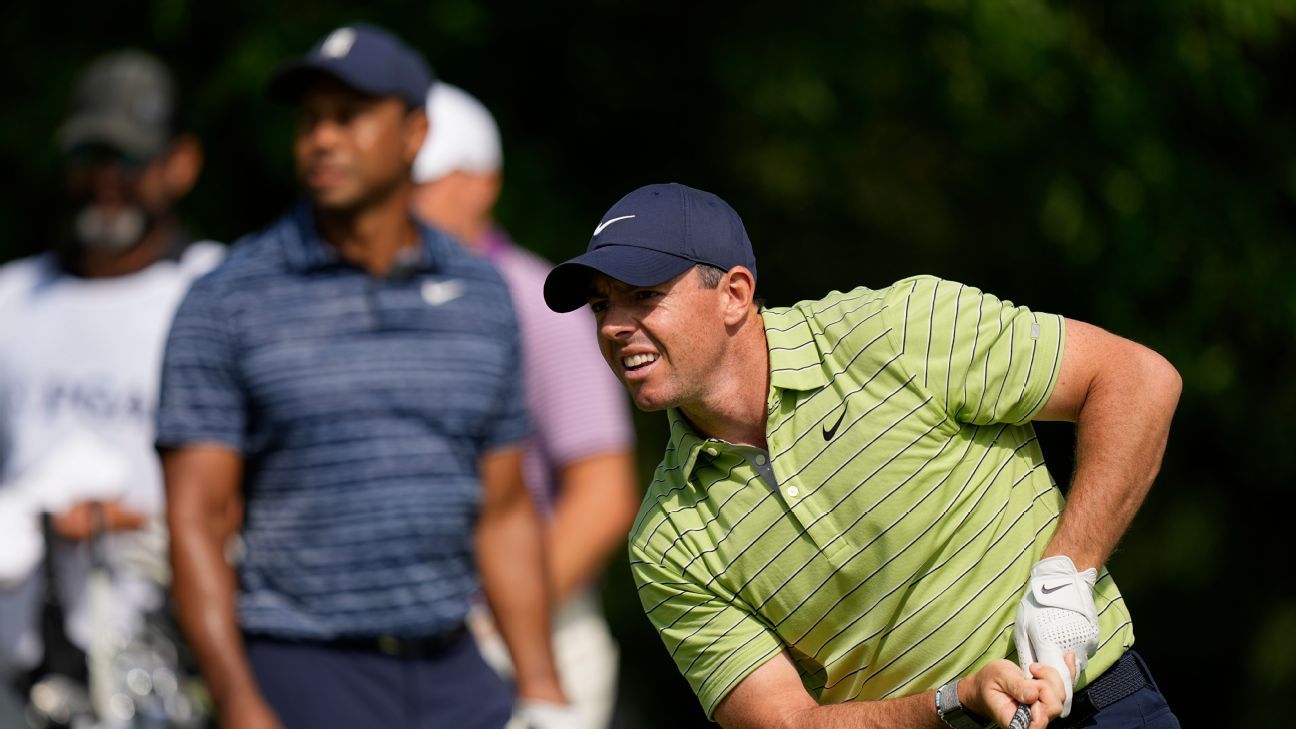 TULSA, Okla. — Rory McIlroy won’t have to worry about back-dooring a top-5 finish at a major championship after he grabbed the first-round lead at the 104th PGA Championship at Southern Hills Country Club on Friday.

With nine one-putts in his first 12 holes and 10 drives longer than 320 yards, McIlroy posted a 5-under 65 to grab the lead after the first 18 holes. It was the fourth time in his career that he shot 65 or better in the opening round of a major, the most by any player in the Masters era (since 1934), according to data from ESPN Stats & Information.

“I’ve been playing well coming in here,” McIlroy said. “I’ve been carrying some good form. Obviously, I took a lot from that last round at Augusta, played well up in D.C. at the Wells Fargo, and played good in the practice rounds earlier this week.”

There are plenty of familiar names within striking distance of McIlroy, including Will Zalatoris (4 under), Justin Thomas (3 under), Xander Schauffele (2 under) and Cameron Smith (2 under).

Smith, who won The Players in March and played in the final pairing on Sunday at the Masters, had seven birdies in Thursday’s first round (as many as McIlroy) and led the field in strokes gained: approach. Schauffele drove the ball extremely well and was one of the best scramblers in the field.

Zalatoris, 25, is one of the best ball strikers in the world and, well, not so much one of the best putters — until Thursday. Zalatoris was ranked 185th in shots gained: putting coming into the week. But he led the field in that category on Thursday, even with a 3-putt on No. 18. He made 150 feet of putts, his most in any PGA Tour round, and made four putts longer than 20 feet.

“Yeah, take those and run with them,” Zalatoris said.

Zalatoris missed the cut in last week’s AT&T Byron Nelson. It will be interesting to see if his putter holds up over the final 54 holes, or if he simply caught lightning in a bottle on Thursday. He already has four top-10 finishes in six major starts.

“I thought being the ball striker I am, obviously it’s shown in the first six or so majors of my career, but on top of that, I think it’s the attitude of this is what I’ve wanted to achieve basically since I was a little kid, and it’s kind of freeing in a way,” Zalatoris said. “Obviously, it’s Thursday. My mind is nowhere near going to be meandering towards that, but that’s kind of my general attitude is you get four of these a year, they’re special, and I don’t want to leave anything to chance.”

Masters champion Scottie Scheffler had a rollercoaster of an opening round. The world No. 1 made an eagle on the 665-yard 5th hole, hitting his second shot to 10 feet from 307 yards away. But on the back nine, he hit just three fairways and he made four bogeys. He also showed some audible frustration, shouting in anger at a putt on 17 when it didn’t break the way he thought it would.

On 18, Scheffler hit his drive into the creek that cuts across the fairway, but made an impressive, improbable up-and-down from 189 yards away to save par. He finished with a 1-over 71. He had 11 consecutive opening rounds under par on tour. The last time he was over par after the first round was at the Houston Open on Nov. 14, 2021.

“I mean, it’s early in the week; still a lot of golf left to play,” Scheffler said. “I guess I’m 6 back now, so 6 shots over three days really isn’t that big of a deal. I’m definitely a lot further back than I had hoped to be, but at the end of the day I’ll probably be in 40th place. This is one of those golf courses where you could have a really great round, and so for me just kind of taking what the weather is going to give us tomorrow morning and kind of go from there.”

What can we expect from Tiger?

Woods looked pretty good at the start of the opening round, with birdies on two of his first five holes. But Woods was 6 over after that and finished with a 4-over 74. He’ll have work to do on Friday in trying to make the cut.

Make your picks and compete for a chance to win $5,000! Make Your Picks

Worse, Woods seemed to be in quite a bit of pain. His limp from his surgically repaired right leg was more noticeable on the front nine, his second nine of the day.

“It has felt better before,” Woods said. “It’s a little sore right now, and we’ll go back and start the process of getting ready for [Friday].”

Like Woods did at the Masters in April, he said his recovery would include several ice baths to try to get the inflammation out of his right leg. The bigger question going forward is how much Woods’ mobility will improve over the next few weeks and months. He has a myriad of screws, plates and pins in his right leg and foot. His ankle will never turn like it used to. Neither will his fused lower spine.

On Thursday, as McIlroy and Jordan Spieth ripped drives past him, it was pretty clear that Woods will never play golf like he once did. When his playing partners pulled drivers out of their bags, he often settled for a long iron. Woods ranked 139th in driving distance (293.4 yards) out of a 156-player field that included 20 PGA club pros and past champion Shaun Micheel.

“Those guys obviously have a different game plan,” Woods said. “It’s just different. The game is played very differently now, and it’s very aggressive. We were talking about it today, [caddy] Joey [LaCava] and I, the days of the Lee Janzens and the Scott Simpsons and the [Nick] Faldos of the world, playing that kind of golf is gone. You go out there and hit driver a lot, and if you have a hot week, you have a hot week and you’re up there.”

Who else has work to do?

There have been two familiar sights at the PGA Championship over the past few years: John Daly riding in a cart drinking Diet Cokes and Brooks Koepka’s name somewhere in the top five on the leaderboard.

Access 4,300-plus hours of live coverage from 35 PGA Tour tournaments each year, including four days of coverage at 28 events with four feeds each day. Plus, access replays, originals and more. Stream on ESPN+

Koepka, who won the event in 2018 and 2019, was in the top five at the end of 14 of the past 16 rounds at the PGA Championship. That wasn’t the case on Thursday, however, as Koepka shot 5-over 75 at Southern Hills. The four-time major champion bogeyed three of his first four holes (his score of 3 over after five holes was his worst at the PGA Championship) and shot 5-over 40 on the front.

Koepka, 32, has been bothered by knee and hip injuries over the past several months. He hadn’t played since missing the cut at the Masters in April.

Other big names who have work to do to stick around for the weekend include: Jordan Spieth (2 over), Collin Morikawa (2 over), Hideki Matsuyama (2 over), Dustin Johnson (3 over), Jon Rahm (3 over), Daniel Berger (3 over), Patrick Cantlay (6 over) and Adam Scott (7 over).

Players in Thursday’s afternoon wave, which included Scheffler, Rahm, Thomas and Cantlay, might face even stiffer gusts on Friday morning.

The weather forecast calls for scattered showers and thunderstorms on Friday afternoon, with winds at 15 to 25 mph. Temperatures are expected to drop from highs near 90 degrees on Friday to the mid-60s on the weekend.

Max Homa, who shot even par in the first round, is one player who might be hoping for rain in Tulsa.

I’m currently losing to Rory by 5 and to allergies by 1000. I enjoy the challenge

On Thursday, the wind lay down early, before picking up later in the day.

“I know about the wind,” said Abraham Ancer, who played at Oklahoma. “It can blow, it can be gusty. With the tall trees it can be a little deceiving where it’s coming from. There’s a couple times you feel it coming from one side and then you see the pin blowing the other way. You just have to stick to it and trust where the forecast says it is and just keep that ball low.

“Hopefully the greens don’t get too firm, that way we don’t have to hit the ball that high.”