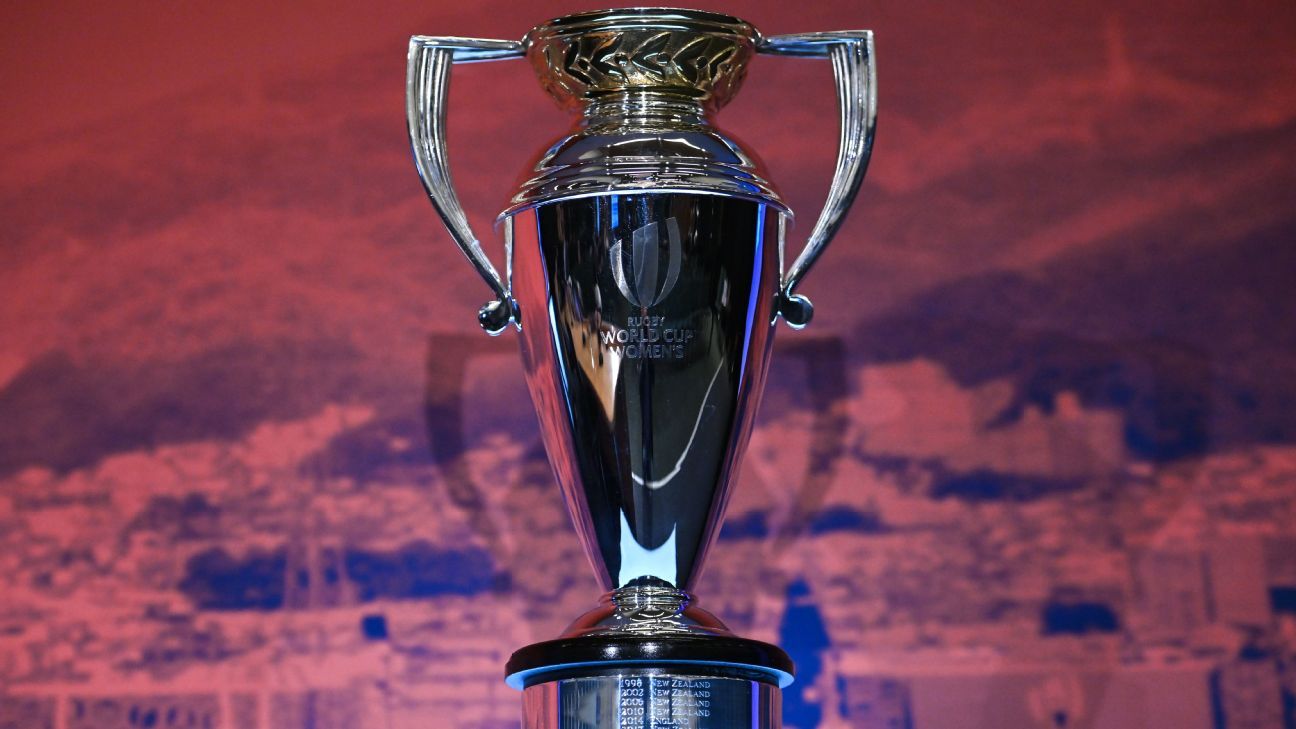 DUBLIN, Ireland — Building a lasting impact is something World Rugby has struggled with when it comes to the women’s game. But the word ‘legacy’ was central to its messaging as the organisation looks ahead to the next decade of the sport as the hosts for the World Cups in 2025, 2029 and 2033 were announced in Dublin on Thursday.

England will host the 2025 edition while Australia will take control in 2029 before the United States host the competition in 2033. Before all that, though, there is the delayed World Cup this autumn in New Zealand. There was optimism on the ground that these future events would draw record crowds with talk of selling out the 82,000 seat stadium of Twickenham. However, New Zealand has struggled to push tickets for the upcoming tournament and with a qualification process marred in delays and poor communication, it is perhaps unsurprising that World Rugby is already looking ahead.

For World Rugby’s newly appointed director of women’s rugby Sally Horrox, there are three big priorities in the coming years:

“When we’re trying to grow a sport — and women’s rugby is in a really early stage globally of its development — visibility is what drives demand,” Horrox told ESPN.

“So in that sense, this runway, this plan, this 10-year certainty that we get is critical and it is where women’s sport has gone wrong in the past. They haven’t got that luxury of planning and resources and investment and then commercial partnerships that come on the back of it. That’s the great thing to have this run in and the countries we’ve chosen are really strong in terms of their potential.”

Horrox has experience in helping to bring women’s sport to the forefront. She is a former non-executive director of England Netball, an advisor to UEFA, international football federations and the English Football Association, and has been particularly involved in the Vitality Netball Super League and the Women’s Super League — two leagues which have seen impressive growth in recent years.

“I think what we’re driving at here is competitive balance in the growth of the game. And again, going back to the point about the game being at quite a young stage with its investment globally and its development, there are significant differences worldwide in terms of the quality, the standards, the ability for the women to play full-time, part-time, amateur,” she said.

“We have to narrow that competitive gap to make the sport as attractive as it can be but that will take time. It’s not going to happen overnight, that will happen throughout the [next] decade.

Horrox offers an example of how the union must help build those pathways.

“Just as a comparison, we’ve seen in the U.S. soccer leagues go bust two or three times in terms of their fast tracking the professional development of the sport and they didn’t build the academies or the pathways and they got into real difficulty and litigation. They’re coming good now — really really good — but you do have to think about that long term,” she says.

One country who are thinking about the long term is the U.S.. USA Rugby has had a difficult few years after it was declared bankrupt in 2020 and had to get help from World Rugby to get back on its feet. They are hoping that hosting the 2031 and 2033 World Cups will not only bring the sport into the spotlight in one of the world’s biggest sporting markets, but that it will also be a key component to developing the “legacy” that World Rugby desperately wants.

The U.S. has a good history with the World Cup. It won the first edition in 1991 and finished as runners-up in 1994 and 1998. Although they have struggled to recapture the success of the 90s, their fourth place finish in 2017 showed that they can’t be counted out as a force in the game.

“We want to raise it, we want to see it grow, I want to see these opportunities for women to play rugby,” USA Rugby board of directors athlete representative Victoria Folayan told ESPN.

“There’s just lots and lots of opportunities for growth. And the U.S. is always trying to one up and get better and better. So just bring on the challenge.”

With NFL and soccer stadiums already on board for the 2033 World Cup, they want to take the expected high turnouts for the 2025 World Cup in England and push the game even further.

“95% of or 90% of the stadiums or cities that have signed, they’ve signed for 2033 and 2031 and in every case, they have signed stadium agreements that also apply to 2031 and 2033. We have on reserve, smaller stadiums if need be. So most of our cities have Major League Soccer stadiums, so they have the smaller 30,000, 25,000 seater stadium,” USA bid chairman Jim Brown told ESPN.

“So we have the flexibility, at least contractually and planning-wise, to either increase the stadium size to the NFL size, which we did plan originally. The opening game with the U.S. playing would be in a large stadium, the semifinals and finals would be in larger stadiums in our initial 2029 planning. But at the same point, we can downsize or increase depending on what we learned from the preceding Women’s World Cups. But we’re really quite bullish on the potential bigger than most people anticipate.”

Not only do Horrox and World Rugby want to build a legacy, they also want to bring recognisable names in the sport to the forefront and harness their star power in the way U.S. Soccer have with people like Megan Rapinoe and Alex Morgan. Visibility and competitiveness is central to this and they are hoping that their new international competition WXV can not only bring rugby’s big names into the spotlight but also help grow the sport into a competitive and entertaining machine.

“The unions are very aware of it, we’re aware of it. We’re investing behind it. We have a project called the pathway to professionalism, which is a priority for next year, we have the WXV launching. So a lot of investment is going behind that to get regular competition to raise standards. So you’re absolutely right to identify it as a priority. And we’ve worked really hard to address it.”

It feels like we have been here before with women’s rugby but Horrox’s vision for the sport and the buy-in from those in World Rugby seems more certain than ever before. Building the legacy that they dream won’t be an easy task but the early signs are encouraging for the sport.

This article was originally published by Espn.co.uk. Read the original article here.

What to watch as the PGA Tour moves to Torrey Pines
Suicide bomber kills at least 47 in Pakistan mosque attack
Google job cuts hit 1,800 employees in California, including 27 massage therapists
See the chilling video Chinese protester made before her disappearance
Israel shoots down rockets after deadly commando raid on flashpoint West Bank town