The UK will have “no choice but to act” if the EU does not show the “requisite flexibility” over the Northern Ireland Protocol, Liz Truss has warned.

Following a call between the foreign secretary and European Commission Vice-President Maros Sefcovic, a foreign office spokesperson said that Ms Truss made clear that the arrangement was “the greatest obstacle” to forming a new Northern Ireland executive.

“The foreign secretary noted this with regret and said the situation in Northern Ireland is a matter of internal peace and security for the United Kingdom, and if the EU would not show the requisite flexibility to help solve those issues, then as a responsible government we would have no choice but to act,” a spokesperson from the department said.

The phone call between Ms Truss and Mr Sefcovic was described by one source as “tetchy”.

Politics Hub: PM will ‘have a look at’ windfall tax

Downing Street said “no decisions have been taken” with regards to the protocol, adding: “We will continue to see what, if any, progress can be made.”

Following the conversation, the European Commission vice-president said it was “simply not acceptable” for the UK to threaten to unilaterally suspend parts of the Northern Ireland Protocol.

“It continues to be of serious concern that the UK Government intends to embark on the path of unilateral action,” Mr Sefcovic said.

He added: “Such unilateral action will also undermine the conditions which are essential for Northern Ireland to continue to have access to the EU single market for goods.”

Since the Brexit transition period ended on 31 December 2020 the protocol has been a point of friction between Westminster, Belfast and the EU.

The UK and EU agreed to put the mechanism in place after Brexit to avoid the introduction of a hard border between Ireland and Northern Ireland.

Lorries can continue to cross the border from Northern Ireland into the Republic without having paperwork and goods checked – as they did when the UK was in the EU.

The protocol states that Northern Ireland will remain part of the UK’s customs territory – so if the UK signs a free-trade deal with another country, Northern Irish goods would be included.

However, Northern Ireland has to stick to some EU rules to allow goods to move freely into the Republic and the rest of the EU.

Products from Great Britain entering Northern Ireland have had to undergo EU import procedures at the ports.

To carry out those checks, an Irish Sea border has effectively been imposed – which Boris Johnson promised would not happen.

Earlier on Thursday, senior government figures close to the negotiations between the UK and the EU over the protocol told Sky News they did not expect an agreement to be reached.

“We of course hoped they would, but it’s increasingly obvious now that they won’t.”

Explainer:
What is the Northern Ireland Protocol and why does it matter?

UK Attorney General Suella Braverman is said to have approved the scrapping of swathes of the agreement, giving Mr Johnson legal cover to make the move, despite warnings from Joe Biden‘s White House and European leaders not to single-handedly meddle with the terms.

Sky News understands that legal advice has been drawn up and shown to some cabinet ministers.

Truss’ message ‘not gone down very well’ with the EU

The prime minister said there wouldn’t be any checks and then there were. And it’s become a huge political problem for him and for the unionists in Northern Ireland.

So Liz Truss delivered the message that we don’t think you’re showing enough flexibility and we now think that that may be the precursor to legislation being brought in next week.

How has her approach been viewed by the EU side? Well, it’s not gone down very well at all.
I have been speaking to a Dublin source, who said that the language of intransigence and inflexibility has not been very well received.

The EU think they have made a lot of compromises already on this, that a lot of the checks on goods going between GB and NI were dropped a few months go.

And they also believe that any move by the British side to simply drop parts of the agreement would be a breach of international law.

However, the government are trying to spin it here at home with legal advice, potentially from the attorney general saying that it is allowed, it would be seen as a breach of the deal on the EU side, and therefore, there would be retaliatory measures.

So it all sounds like it’s come to a crunch point.

Earlier this week, the foreign secretary had warned she would “not shy away” from taking action as she accused the EU of proposing solutions that would “take us backwards”.

Officials working for Ms Truss are drawing up draft legislation to unilaterally remove the need for checks on all goods being sent from Britain for use in Northern Ireland.

The proposed law would allow businesses in Northern Ireland to disregard EU rules and regulations and remove the power of the European Court of Justice to rule on issues relating to the region.

Crucially, it would in parts override the protocol agreed by Mr Johnson in 2019 and mean the UK had breached its obligations under the Brexit agreement.

But it has been argued the protocol will not be completely overridden, with measures being considered to ease the issues on the ground in Northern Ireland.

On Wednesday, the prime minister said the Good Friday Agreement was more important than the Northern Ireland Protocol as he dismissed suggestions of any possible escalatory response from the European Union as “crazy”.

According to the original report in The Times, Ms Braverman had advised that legislation to override the protocol would be legally sound because of the “disproportionate and unreasonable” way it has been implemented by the EU.

She has submitted evidence accusing the EU of undermining the Good Friday Agreement by creating a trade barrier in the Irish Sea, and warned of “societal unrest” in Northern Ireland, the newspaper said. 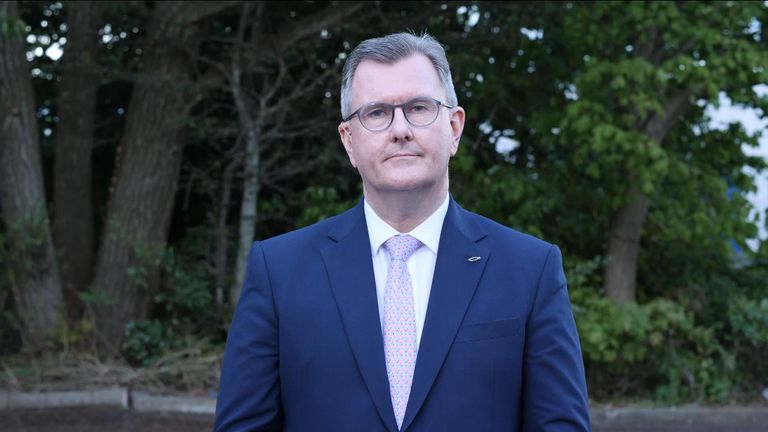 There is said to be a rift in the cabinet over the move, with Ms Truss, Ms Braverman and Brexit opportunities minister Jacob Rees-Mogg reportedly in favour, while Chancellor Rishi Sunak is concerned about the impact on the economy.

Speaking earlier on Thursday, Irish Foreign Affairs Minister Simon Coveney said he believed the UK and the EU can still agree a way forward to fix some of the issues with the Northern Ireland Protocol.

But he warned: “We’re not going to do it under the threat of British government’s language and briefing of the media which says if the EU doesn’t give us everything we want, well, then we’re going to legislate ourselves to override international law.”