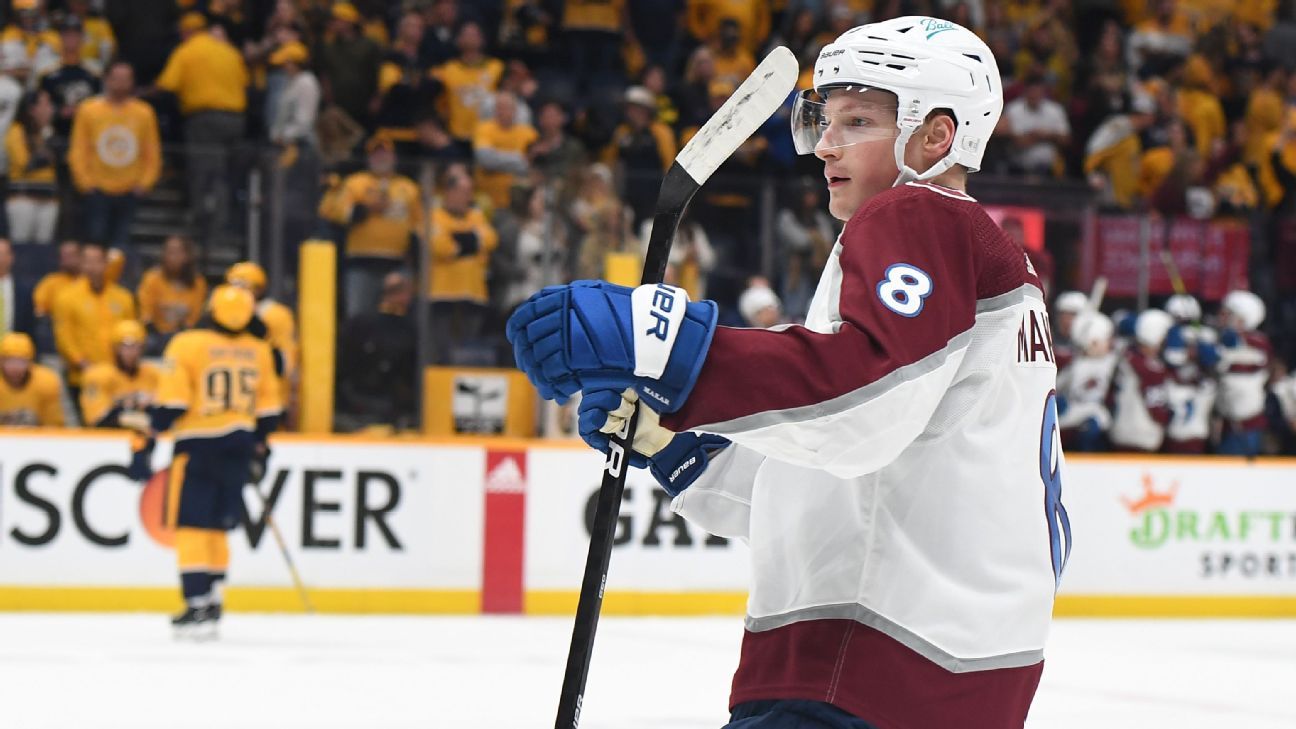 Each series in the 2022 Stanley Cup playoffs has now gotten through Game 4, with no shortage of goalie drama, blowouts and controversy with on-ice officials.

This postseason has certainly been thrilling, and following Monday’s wins by the Florida Panthers and Calgary Flames, there will be a total of six Game 5 matchups in which the series is tied 2-2, including all four contests on Tuesday night. According to ESPN Stats & Information, the six 2-2 series in an opening round ties the NHL record, set in 1991.

What have been the biggest lessons learned from the first 32 games this postseason? And how will those trends impact the rest of the first round — and beyond? Here are our top eight takeaways:

The ‘last ride together’ motivation

The “last ride together” is a familiar trope in the Stanley Cup playoffs, combining the “championship window” idea with the reality of retiring players and expiring contracts. Teams like the Pittsburgh Penguins, Boston Bruins and Los Angeles Kings openly discussed the future of their core groups of players and how taking advantage of this moment together was important. So far, prolonging the magic has been a heck of a motivation.

Sidney Crosby has nine points in four games, looking desperate on every shift to extend his time with pending free agents Evgeni Malkin, Kris Letang and Bryan Rust. Brad Marchand also has nine points in four games, skating every shift with Patrice Bergeron while knowing his captain doesn’t have a contract for next season. Jonathan Quick spun back the clock to 2014 with a Game 4 shutout against Edmonton, as he and Anze Kopitar seek one more run with retiring teammate Dustin Brown.

The Penguins are one win away from advancing. The other two series are tied as of Monday night. If this were a wrestling match, the crowd would be starting the “You still got it!” chant for these former champions looking for one more sip from the Cup. — Greg Wyshynski

We don’t keep official stats on these things specifically (yes, I checked) but the 2022 postseason must be on track for a record-breaking number of goaltending-related calamities.

There were the pre-playoff injuries to key starters like Pittsburgh’s Tristan Jarry, Carolina’s Frederik Andersen and Nashville’s Juuse Saros. Then the Game 1 injury to the Penguins’ Casey DeSmith, followed by spicy-pork-and-broccoli spokesman Louis Domingue‘s emergence. How about Darcy Kuemper getting hit through his mask right in the eye? Or Antti Raanta being run over in the crease only to have rookie Pyotr Kochetkov take over in his first NHL playoffs appearances to hold the fort?

There have been other positive in-series dramatics, too. Jordan Binnington returned to playoff form just in time for the Blues against the Wild, Quick stole Game 4 against Edmonton with a historic shutout, Jeremy Swayman has Boston all tied up with Carolina, and Predators third-stringer Connor Ingram made his postseason debut and gave Nashville a fighting chance after David Rittich flamed out.

Toss in two subpar games by projected Vezina Trophy winner Igor Shesterkin, who allowed four goals on 15 shots to Pittsburgh in Game 3 and six goals on 30 shots in Game 4, and it’s been a wild ride in the nets all around this postseason.

For years, NHL fans complained that the Stanley Cup playoffs were a black hole for offensive creativity, where a parade of 2-1 defensive struggles replaced the goal-scoring from the regular season. Well, be careful what you wish for: There’s been a ton of offense in the 2022 Stanley Cup playoffs. Unfortunately, it’s been one team in each game doing the scoring.

From a wagering perspective, 20 of 32 playoff games have gone over the “over/under” total through Monday’s games. That’s a hefty amount for the playoffs, as the goal-scoring boom of the regular season — the highest goals-per-game average since 1995-96 — continued in the postseason. But the more interesting scoring trend is in the margin of victory in these games. Through Monday night, 27 of 32 games had been decided by two goals or more. Last year, over half the playoff games were decided by one goal.

One big reason for the margin of victory disparity: a lack of overtime. Through 32 games, there have been only three overtime games. Through the first 32 games of last postseason, there had been 11 overtimes games. Hopefully the fireworks have distracted from the lack of drama in the first round. — Wyshynski

The Leafs and Lightning are each loaded with offensive talent. This series, now tied at 2-2, just has yet to showcase both teams’ firepower in the same game. Momentum has swung like a pendulum between these clubs, to the point it has been clear from the first period in each contest who would come out on top. All four games have been won by the first team to score, and all four games have been decided by multiple goals. But if each matchup itself has lacked for drama (and the “borderline violence” Leafs coach Sheldon Keefe predicted), the best-of-seven itself is a fascinating study.

First, there’s the lack of consecutive defeats. Tampa has impressively extended its NHL-record win streak following a loss to 17 games (no other club in history has ever done that more than 10 times in a row) but also ceded ground to the Leafs in Games 1 and 3, so back and forth they go. Each starting netminder in the series has also had one truly terrible outing: Andrei Vasilevskiy in Game 1’s 5-0 clunker, Jack Campbell in Game 4’s 7-3 stinker.

If the pattern continues, the Leafs will close out Tampa at home in Game 7. But this is a Lightning team that knows how to rally on a big stage … against a Toronto team known to wilt under a similar spotlight. Something’s gotta give down the stretch. — Shilton

The Colorado Avalanche burned through the Predators like a plate of Nashville hot chicken down one’s esophagus. Leading the way in their sweep was defenseman Cale Makar, who needed only four games to make NHL history. He finished the first round with 10 points, leading the Stanley Cup playoffs in scoring through Monday, and setting a record for the most points by a defenseman through four games in a postseason.

Nathan MacKinnon told ESPN’s Scott Van Pelt that Makar “might be the best player in the league right now,” and there’s certainly a case for that. With all due respect to Roman Josi, no defenseman in the NHL has the combination of offensive explosiveness and defensive acumen that Makar does. As he showed in Game 4, he can score brilliant goals as easily as he can set up others to score them. It’s too early to talk playoff MVP — or to coronate the Avalanche — but one could already see Makar skating back to his teammates holding a Conn Smythe Trophy the way things are trending. — Wyshynski

Calgary had the NHL’s sixth-ranked offense in the regular season (3.55 goals per game). Yet somehow it took the Flames until Game 3 to score four cumulative goals in these playoffs. Game 4 seemed to signal a turning point, as the Flames netted four goals on 54 shots. Some of Calgary’s top producers, including Johnny Gaudreau, hadn’t scored until Game 4 (though Gaudreau’s goal came on a penalty shot).

It’s not as if the Stars were a top-10 defensive team this season, either. They were middle-of-the-pack, allowing just under three goals per game and averaging 31 shots against. Dallas appeared to have Calgary’s number until Monday’s 4-1 loss, though. And even in that defeat, Stars goalie Jake Oettinger was brilliant, making 50 saves.

The series is tied 2-2, meaning there’s plenty of time for Dallas to tap into what has worked before in shutting down the Flames’ offense. Unless, of course, Calgary has truly found its way out of a rut. The Flames certainly looked, for the first time this postseason, like a true contender in Game 4. Was that Calgary catching fire? — Kristen Shilton

If there’s one thing we can count on in the Stanley Cup playoffs, it’s a goalie interference controversy every few games. This postseason has seen its share. There have been two of them alone in the Carolina Hurricanes‘ series against the Boston Bruins, including one in which the Hurricanes were convinced Jake DeBrusk‘s Game 4 goal would be discounted for pushing the pad of goalie Antti Raanta. Coach Rod Brind’Amour challenged the goal — and failed. “They’re too good a team to just give them goals. We have no chance if that happens,” he lamented.

ESPN and ESPN2 will be broadcasting first- and second-round games, with one conference finals series on ESPN and the Stanley Cup Final on ABC.
• How to watch
• Subscribe to ESPN+
• Stream the NHL on ESPN

Perhaps the most controversial goalie interference call came in Game 1 between the Pittsburgh Penguins and New York Rangers. With 3:10 left in the third period, New York thought it had a lead on a goal by center Filip Chytil. But the NHL ruled that New York’s Kaapo Kakko impaired DeSmith’s ability to play his position in the crease, after colliding with him on a rush to the net. The Penguins’ challenge succeeded. The game remained tied. And Evgeni Malkin finally ended it in triple-overtime.

One thing to watch, going forward: The cost of doing business when challenging a goalie interference. The Penguins had to challenge the Rangers’ goal, considering how little time was left in the game. Meanwhile, in Game 4 between the Canes and Bruins, challenging turned out to be a costly gamble for Carolina. Center Sebastian Aho took a high-sticking double-minor penalty 51 seconds later for bloodying Bergeron, giving the Bruins a 5-on-3 advantage with 25 seconds left in the second period. Marchand scored the game-winning goal just 44 seconds into the third period on the power play, just as the delay of game penalty expired. “I would have bet my life on that one,” said Brind’Amour. — Wyshynski

How many times have coaches in this round lamented a “parade to the penalty box” by their team? The efficacies of power plays and penalty kills has been a major factor throughout the first four games for all 16 teams. Let’s explore the numbers:

Considering that in the last pre-COVID postseason of 2018-19 there were 109 power-play goals scored total, the fact that we’re creeping up on halfway there very early in this campaign seems like a lot.

Given all that, did anyone expect Florida to be the only team without a power-play goal in the playoffs at this point? The Panthers ranked fifth (24.4%) with the extra man in the regular season. But they’re 0-for-13 in the postseason. Just wild.

Regardless, most teams would rather have games decided at 5-on-5 anyway. So what’s with the seemingly massive uptick in special-teams play? General lack of discipline feels like too easy an answer. More likely it’s a combination of referees calling games tightly while players try to push their luck making an impact at the most critical time of year.

And really, whatever the rationale, it has made for entertaining hockey. The sustainability of so much special teams action will come into play now. Will deadlocked teams eager to reach the second round have to start playing it safe? — Shilton

Quick Charge Podcast: December 3, 2022
GOP tension builds over McCarthy’s House Speaker race
Hear what Herschel Walker said about his residency
Oil cartel sticks to targets despite uncertainty over new sanctions on Russia
Passan: Why a winter meetings frenzy could be brewing — and who could sign in San Diego