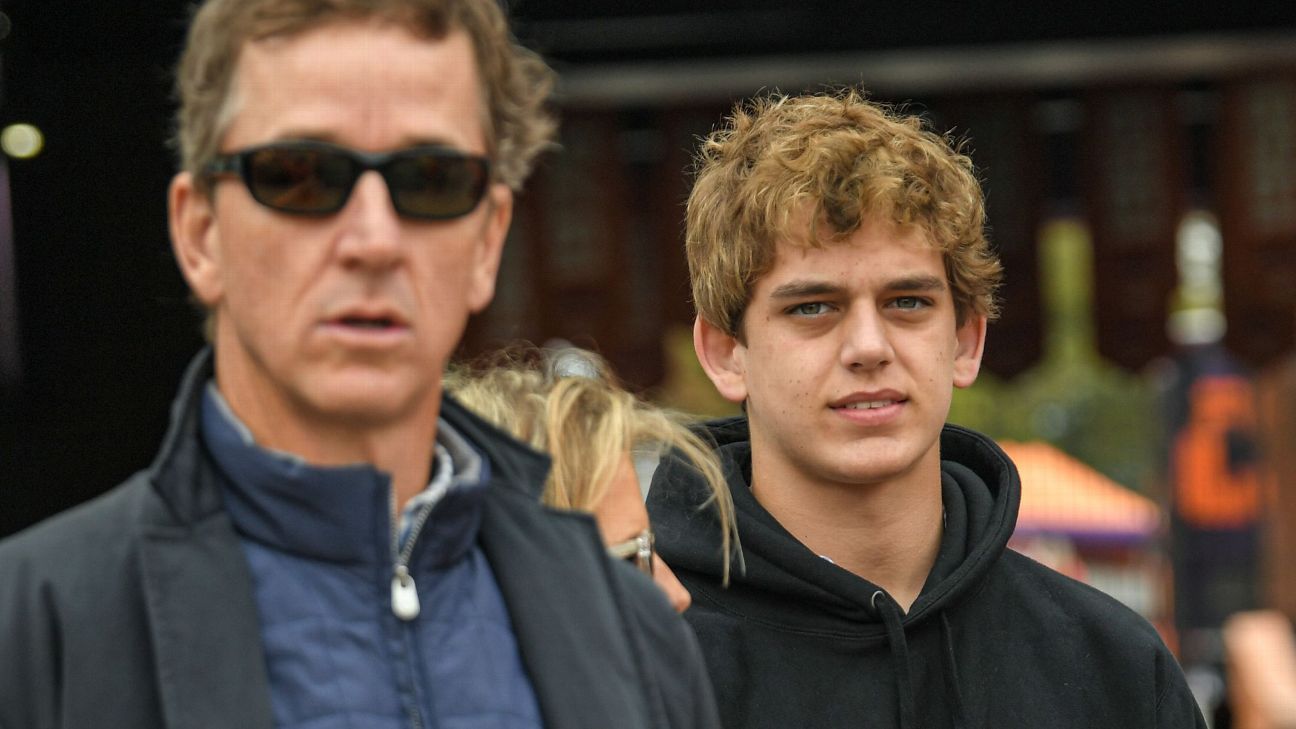 Notre Dame, Georgia, Ohio State and Louisville are the four teams with the most ESPN 300 commitments as of now for the 2023 cycle. The Irish stand at the top with eight of the top 300 recruits, with Georgia one behind with seven.

While those teams have gotten off to a fast start, only 90 ESPN 300 prospects have made a commitment, which means there is still a lot of change that could happen within this class. There are still nine of 10 five-star recruits uncommitted and most position groups still have the top recruit available.

Some highly sought-after recruits are still on the board, so here is a look at the top uncommitted prospects left in the 2023 class.

Manning has been one of the most talked about recruits in the class, given his uncles are Peyton and Eli, his grandfather is Archie and his father is Cooper Manning. He has kept a low profile, though, and the family has intentionally allowed him to stay out of the spotlight to just be a kid.

Alabama, Florida, Georgia, LSU, Ole Miss and Texas have been the schools mentioned the most with Manning. He has taken visits this spring after focusing on his football season and has started to ramp up his recruiting focus. Manning doesn’t have a commitment date announced yet, and his coach has said he is still open to the process and wants to take his time to evaluate each program.

He doesn’t need to rush a decision, as every program would have a spot for him if he wanted to commit.

He is considering Alabama, Florida, Georgia, Ohio State, Oklahoma, Oregon and Texas A&M, and is still going through the process. He took visits to Florida and Georgia in March, then visited Alabama in April and Oregon at the end of the month into the beginning of May.

Moore had been committed to Oklahoma since last September, but decommitted in January. He is a teammate of ESPN 300 quarterback Malachi Nelson and ESPN 300 receiver Makai Lemon, both of whom committed to USC after they each decommitted from Oklahoma.

Moore hasn’t yet flipped to the Trojans, and while that is a possibility, he is also considering Louisville, Oregon, Texas and Alabama.

Robinson is the No. 1 tight end in the class as a 6-6, 230-pound recruit out of Pinnacle High School in Phoenix. He is being recruited to play both football and baseball and is highly regarded in both sports.

He hasn’t released a top list yet, but USC, Alabama, Georgia, Oklahoma and a handful of other schools are mentioned with Robinson. The Trojans and the Dawgs seem to be the two that are mentioned the most, however.

Mauigoa is the No. 1 offensive tackle in the class and a five-star prospect from IMG Academy. He’s a 6-6, 325-pound tackle, and has taken recent visits to Michigan State, Florida and Miami.

He released a top 13 in March that consisted of Alabama, Florida, Georgia, Oklahoma, Texas, Miami, Oregon, LSU, Penn State, Ohio State, Hawai’i, USC and Michigan. He hasn’t narrowed his list any further since.

LeBlanc is the top defensive end in the class since Lebbeus Overton reclassified to the 2022 class. He’s a 6-5, 250-pound end from Seminole, Florida, and he initially came out with a top seven in December that included Clemson, Florida, Miami, Ohio State, Oklahoma, Penn State and UCF.

Florida, Miami and Oklahoma have been in the forefront as of late. LeBlanc visited Oklahoma in March, then saw Florida and Miami in April. He said he will announce his commitment July 23.

Woods is the No. 9 prospect overall, but the top defensive tackle in the class and the No. 2 recruit in Alabama.

Hill is a five-star prospect out of Billy Ryan High School in Denton, Texas. He’s a 6-2, 230-pound outside linebacker and has had nearly every major program after him.

It appears Alabama, Miami, Oklahoma, Texas, Texas A&M and USC are schools that have made a big impact on him, though, and should be in the mix for his final decision. He took a visit to Texas A&M in April and is supposed to visit USC in June.

McClain is a five-star recruit and the No. 1 corner in the class, as well as the No. 1 prospect in Florida. He is a 6-2, 165-pound defensive back out of Lake Gibson High School in Lakeland, Florida.

He hasn’t released a top list yet, but Alabama and Florida are two teams strongly vying for his commitment. He has nearly every major program after him and hasn’t set a commitment date yet, so that could change.

Downs is the top safety in the class and the No. 1 recruit in Georgia. He’s a 5-11, 185-pound defensive back from Mill Creek High School in Hoschton.

Downs said he isn’t releasing a top list publicly just yet, but he has scheduled official visits to Georgia on June 3, Notre Dame on June 10, Alabama on June 17 and Ohio State on June 24. Those schools are obviously in high consideration, and it’s possible his decision will come from one of those four.

Chancellor’s ‘Britain needs you’ plea to the retired may be a tall order
Government homes in on £5bn cladding settlement with housebuilders
Bodycam footage shows Tyre Nichols calling for his mother as he is beaten by officers before his death
Met Police says two to three officers will face charges every week for months
Tesla shares pop on ‘better than feared’ earnings results, demand outlook