Dave Chappelle and Chris Rock have appeared together at a Los Angeles comedy club, talking about being assaulted onstage.

The pair appeared at The Comedy Store in west Hollywood on Thursday, just two days after Chappelle, 48, was “tackled” during his show at the Hollywood Bowl, according to The Hollywood Reporter.

Chappelle’s appearance at the event was a last-minute addition, the news website said, with fans having paid $160 (£130) for a ticket to see the “secret show” with an unnamed star comedian. 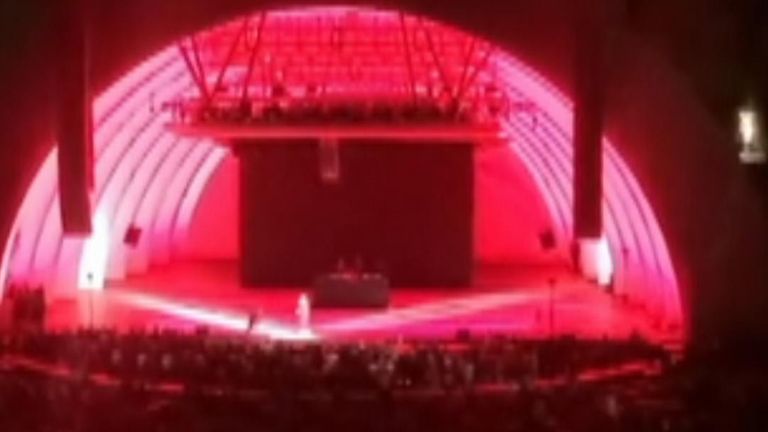 Ten minutes into Chappelle’s performance, Chris Rock – who was slapped by actor Will Smith onstage at the Oscars – joined him.

According to The Hollywood Reporter, Chappelle told his audience that he had been calmed down at the sight of fellow comedian and actor Jamie Foxx wearing “a sheriff’s hat”, and had been embraced by his son after the alleged attack.

It was at that point that Rock joined him onstage, and Chappelle told him: “At least you got smacked by someone of repute.

“I got smacked by a homeless guy with leaves in his hair.”

Rock reportedly laughed and referred to Smith as “soft”.

Isaiah Lee, 23, appeared in court on Friday in relation to the incident with Chappelle, and he pleaded not guilty to four misdemeanour charges – battery, possessing a deadly weapon with intent to assault, unlawfully crossing from a spectator area on to a stage at a theatrical event, and interfering with or delaying such an event with unlawful conduct.

Chappelle told his audience on Thursday that he had been able to enter the room where Lee was being held by security at the venue, adding: “I needed to talk to him.”

He had asked Lee about his motives and Lee told a story about his grandmother in Brooklyn, who had been forced out of her home due to gentrification, saying the attack on Chappelle was intended to draw attention to her plight.

Lee, who remains in custody, was ordered to stay at least 100 yards (91 metres) from Chappelle as part of a protective order.

Rock was slapped on stage at the Academy Awards in March by Will Smith.

The comedian had made a joke about Smith’s wife’s hair, not realising her hair loss was the result of alopecia.

Smith then went on to win the Oscar for best actor.

Six British children discovered in abandoned wine cellar in Austria
Johnson told to stop asking Richard Sharp for financial advice days before he was made BBC chair – reports
‘I was sad for the institution’: Nancy Pelosi speaks out about McCarthy speaker vote
How the Supreme Court could soon change free speech on the internet
Sky reporter blocked from asking JK Rowling question