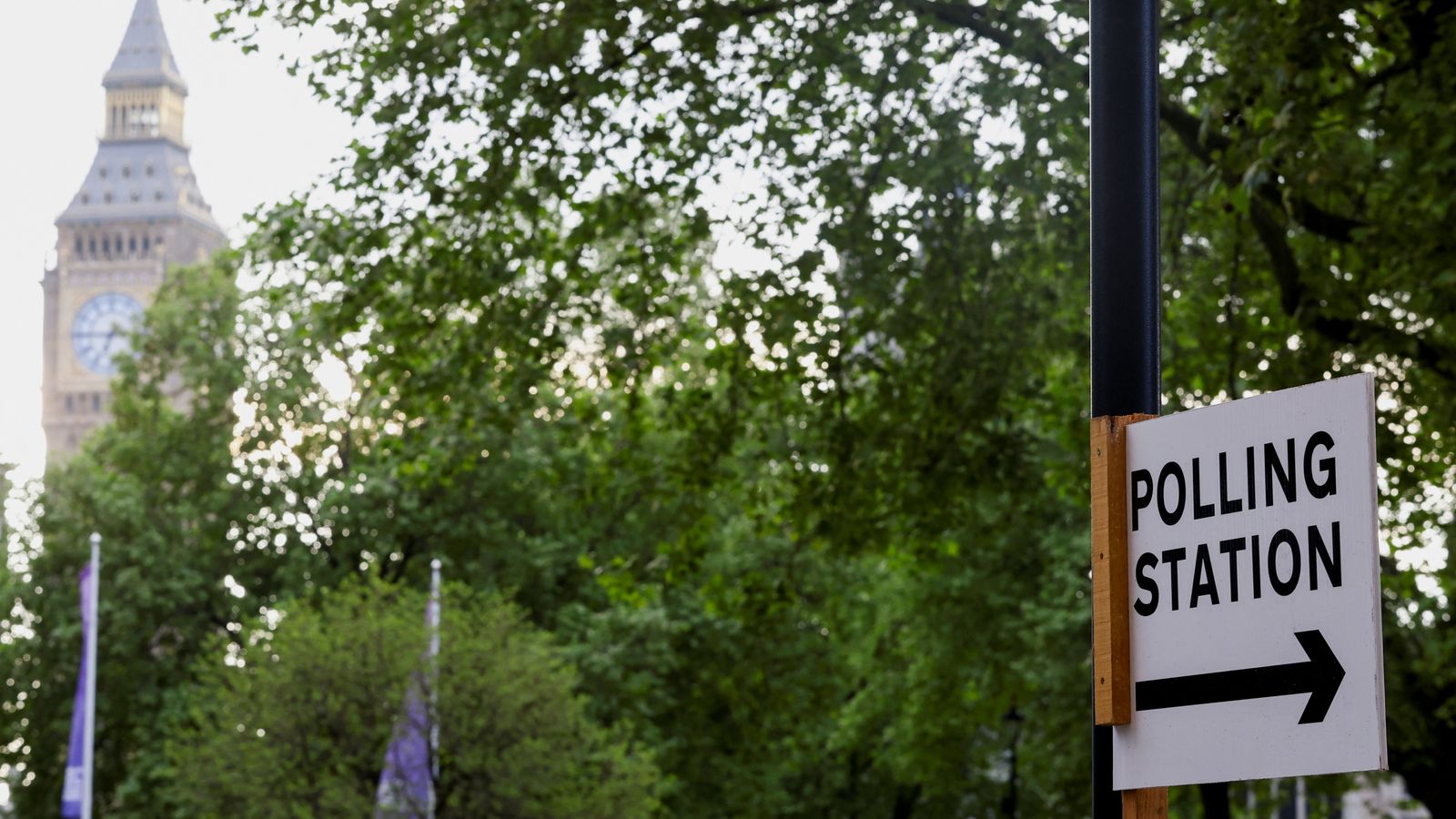 Votes are starting to be counted in a set of elections that will help us gauge the political fortunes of Boris Johnson and Sir Keir Starmer.

Although people have cast their ballots for local representatives who will be responsible for planning issues, housing and rubbish collections, these local elections give voters a chance to have their say on national issues.

So what would represent a good performance for either of the two parties and what would be a cause for concern?

Politics Hub: Follow the local election results as they come in

350+ seat losses: This would indicate the party has been caught in a pincer movement between Labour and the Liberal Democrats.

Conservative MPs in marginal “red wall” and southern constituencies will be worried with an election on the horizon.

100-150 losses: The government will write this off as “mid-term blues”, but it would confirm Conservatives now trail Labour in popular support.

Little change: A comfortable position for the government at this stage of the parliament.

100-150 gains: This would be a sign that the Conservatives are continuing to make inroads into unfamiliar, previously Labour territory, as we witnessed in the 2019 and 2021 local elections.

This would be a vindication for Mr Johnson and would likely shore up his position in Downing Street.

200+ seat gains: The party’s best local election performance for at least a decade.

It would potentially be a foothill on the way to Labour becoming the largest party at Westminster, even if they fall short of an outright majority.

50-100 gains: Progress on 2018, including perhaps gaining some key target councils like Southampton and Wandsworth.

Little change: Disappointing for Sir Keir, given the government’s woes, but it would suggest a much more solid performance in Red Wall seats than in the 2021 locals.

100-200 losses: 2021 all over again with support in parts of the urban North and Midlands still vulnerable.

Which races should you keep an eye on? 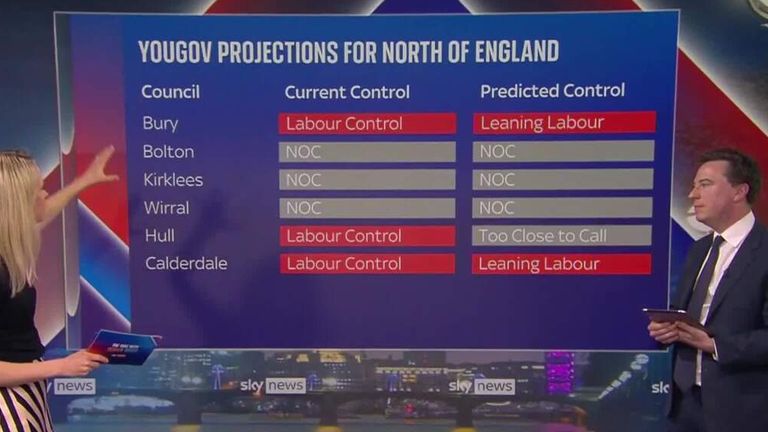 YouGov release predictions ahead of vote.

Below are the key local authorities to watch out for, along with an expected declaration time and some context to explain the importance of the contest.

A results projection from YouGov, reported exclusively by Sky News on Wednesday, suggests Labour is likely to advance in key battlegrounds but may struggle to win significant numbers of new councils outright.

The Conservatives have either been in control or the largest party here since 1964. Labour will be hoping to run the Tories close.

A solidly Tory council for a number of years, but boundary changes have reduced the number of seats from 60 to 45. Any Labour gains will be encouraging for the party.

The second safest Tory council in London, so the party’s majority shouldn’t be at risk. But like with Bexley, Labour will be hoping to make some inroads.

Labour’s majority on the council could be under threat after a number of controversies involving the local authority.

Normally a reliable Tory bulwark, but if Labour are having a very good night then the blue majority could be in peril.

Conservative-controlled since 1978, but Labour polled the most votes last time out and now controls all three parliamentary constituencies in the borough.

Less than two percentage points separated the Conservatives and Labour last time round.

One of the boroughs that showed a sharp decline in Labour’s vote share between 2018 and 2019. The parliamentary constituency of Penistone and Stocksbridge, which straddles the border between Barnsley and Sheffield, was captured by the Tories from Labour.

Labour polled just over 50% of the vote four years ago and will be expecting to match this strong performance. The Conservatives gained the parliamentary constituency of Birmingham Northfield in 2019.

The Tories won the parliamentary seat of Bolton North East in 2019, but may have their work cut out to match its performance last year when some seats on the council were contested.

Labour will be expecting to hold onto its narrow majority here if it repeats its 2018 performance.

A borough that has been swinging to the Conservatives for some years, so the number of seats the party manages to successfully defend will be keenly watched.

Labour dominates the council here, but should the Tories repeat their 2021 performance they could cause problems.

The council is currently run by a Labour/Green administration and the real challenge to Labour here will come from the Liberal Democrats.

Labour has a comfortable majority here, but this has been under pressure from both the Conservatives and Liberal Democrats recently.

The resignation of constituency MP Imran Ahmad Khan, who was convicted of sexual assault against a 15-year-old boy and has said he intends to appeal against the verdict, means this borough will be closely watched ahead of the ensuing by-election.

The Conservatives took two parliamentary constituencies in this area in 2019 and the borough-wide vote share will be of greater interest than the number of seats won.

Scene of a Conservative by-election win on the same day as the 2021 local elections. There will be keen interest in whether Labour can put in a strong performance and reassert its presence.

Labour won an overall majority by a small margin in 2018, but the Liberal Democrats won the popular vote.

This council has seesawed between Labour and the Conservatives for a large portion of the quarter century since it became a unitary authority.

A hung council with the voting close between the three main parties. Labour needs a good result here after slipping back in the previous two election rounds.

The authority has been fiercely competitive between Labour and the Conservatives. The Tories have a majority of two and Labour could take control of the council again.

A former mining area that has been in predominantly Conservative hands since the turn of the century. Labour retaining the eight seats it holds that are being contested this year will be considered a good result.

Labour could gain control of this council if it registers a clean sweep of the seats up for grabs this election cycle.

Labour has been going backwards here since it lost control for only the second time in more than 40 years in 2018.

The Liberal Democrats defend a healthy majority here and ran the Conservatives close in the 2019 general election as well.

If Labour has ambitions to win the next general election, this is the kind of area in which it has to demonstrate increased levels of support.

Gaining two extra seats and retaining the ones it currently holds would give Labour an overall majority for the first time in the council’s history.

Obama mocks Herschel Walker’s vampire remark
First trailer and title revealed for Ford’s fifth and final Indiana Jones film
Hear what Herschel Walker said about his residency
Christopher Eccleston: ‘Patriarchy cocks everyone up… It did its damage to me too’
Passan: Why a winter meetings frenzy could be brewing — and who could sign in San Diego