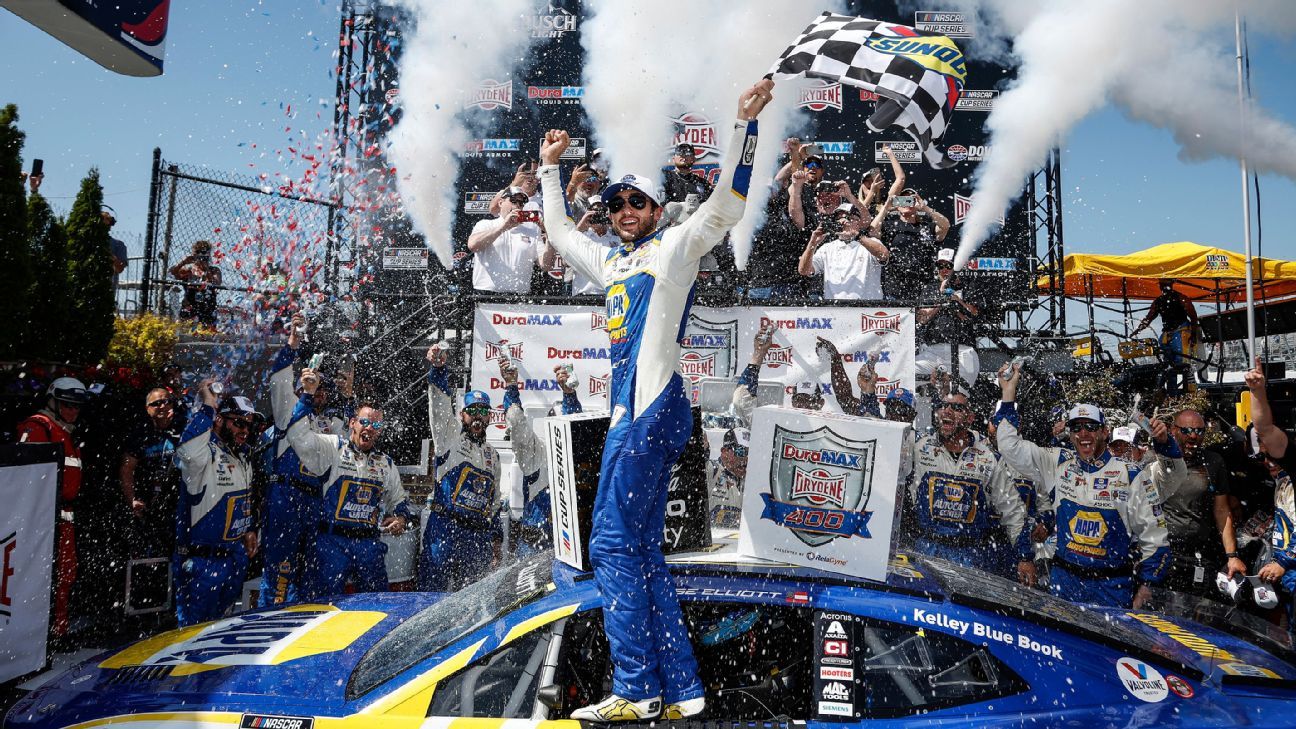 DOVER, Del. — Chase Elliott snapped a 26-race winless streak when the 2020 NASCAR champion pulled away down the stretch to win the Cup Series race on Monday at Dover Motor Speedway.

Elliott, who led the final 53 laps, won his 14th career Cup race and gave Hendrick Motorsports another victory on the mile concrete track. Elliott followed teammate Alex Bowman’s checkered flag a year ago, and a Hendrick driver won for the 22nd time at Dover.

Hendrick swept the top four spots last season, but Monday’s race – with a finish delayed a day because of rain – had four different teams in the top four spots. Ricky Stenhouse Jr. was second and had his first top-five finish of the season for JTG Daugherty Racing. Ross Chastain, last week’s winner at Talladega, was third for Trackhouse Racing and Joe Gibbs Racing driver Christopher Bell finished fourth.

Elliott, who leads the points standings, hopped on the window ledge of his No. 9 Chevrolet and pointed toward a solid crowd at Dover for a weekday race.

“We just had some good circumstances, finally,” Elliott said. “We’ve had some tough races over the last four, five months. This one means a lot in so many different ways. Hope to see this big crowd here next year.”

Martin Truex Jr. spun himself out on the last lap while racing for a top-five finish when he appeared to get boxed out by Chastain. Chastain and Truex argued on pit road after the race.

“We were talking about where we were going to go fishing next week,” Chastain cracked. “I’m racing with champions and I got beat.”

The race was red-flagged Sunday with Hendrick teammates Kyle Larson and Elliott sitting first and second. Elliott controlled the race late and Hendrick now has had all four drivers win a race this season. Elliott was building toward the win after three straight top-10 finishes at Martinsville, Bristol dirt and Talladega.

“Those guys, they’ve been deserving of one for a while,” Elliott said. “Glad we could get across the line first. We’ll enjoy it for a few days and go to work next week.”

Denny Hamlin, who won the first stage of the race, lost serious ground after a left-front tire wasn’t properly attached to his No. 11 Toyota and rolled down the track. Hamlin apologized this week for posting a crass anti-Asian meme on Twitter.

Hamlin worked his way back into fourth when he connected with Cody Ware and brought out the caution on Lap 242.

Larson also spun on the frontstretch and blew the front and rear right tires on his Chevrolet. AJ Allmendinger also lost a tire.

Dover wrapped its only NASCAR weekend of the season. The track traditionally held two NASCAR weekends but moved one race date last season to Nashville Superspeedway. Dover hosted one race weekend in 1969 and 1970 and then held two races every season from 1971 to 2020.

“I think it’s a great event and I hope we continue to race there for a long time. It’s definitely a cool place,” Bowman said.

The Cup Series races next Sunday at Darlington Raceway in South Carolina. Truex is the defending race winner. Toyota is set to celebrate its 1,500th NASCAR race during Darlington’s annual Throwback Weekend.

Big Oil poised to smash annual profit records — sparking outcry from campaigners and activists
Sam Bankman-Fried tried to influence witness through Signal, DOJ alleges
Chancellor’s ‘Britain needs you’ plea to the retired may be a tall order
TravelCenters (TA) to deploy 1,000 Electrify America DC fast chargers at 200 locations across major highways
Alec Baldwin will remain in lead role of Rust – days after being charged over shooting on the film’s set