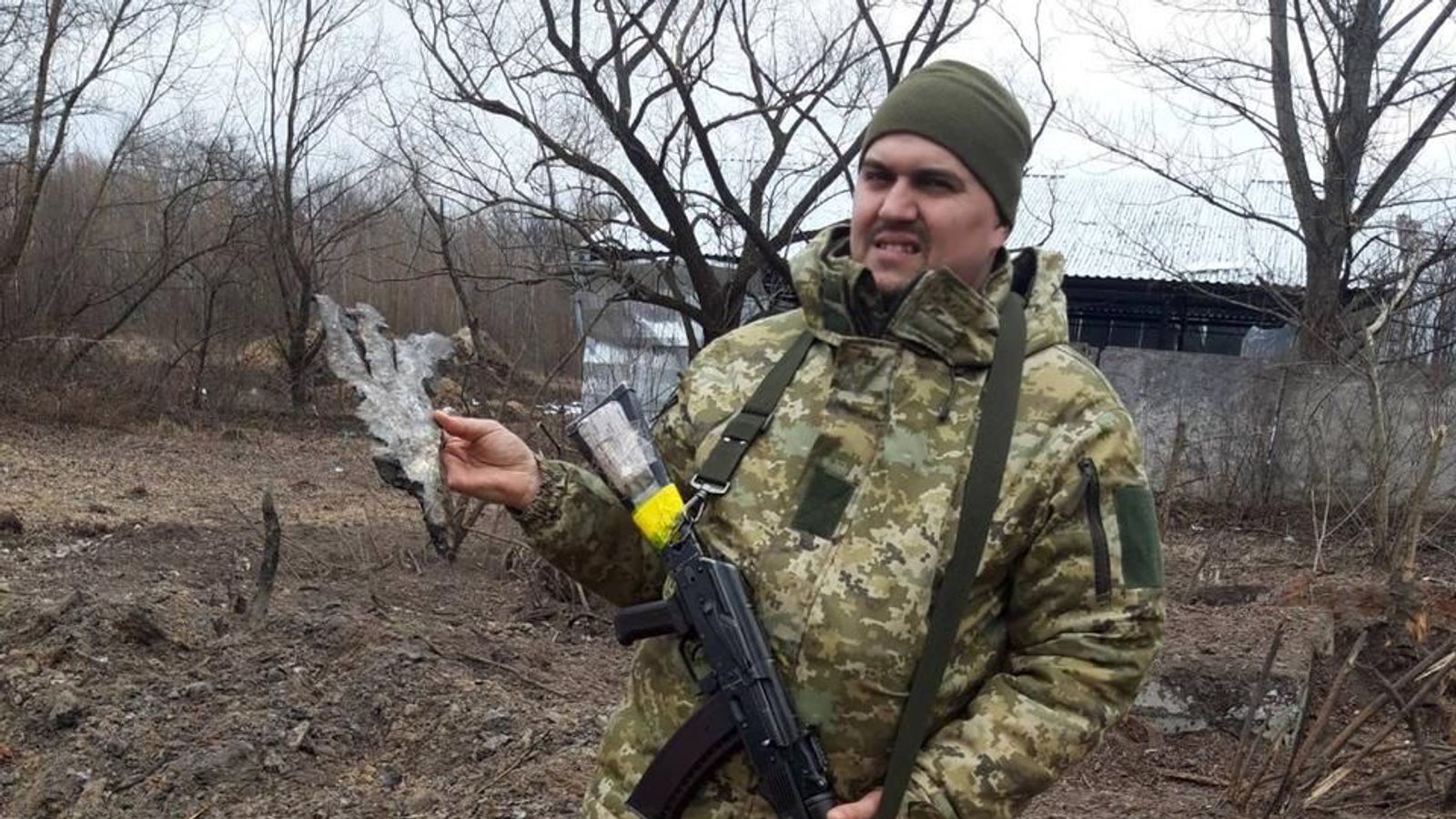 The contractions started after she learnt her husband, a Ukrainian border guard, had been killed by a Russian sniper.

Viktoria Nazarenko, 34, gave birth to twin boys the next day.

Joy overwhelmed by grief at the loss of Sergeant Bogdan Nazarenko, their father.

“It’s all I have left from him – my babies and my memories, which will never be erased,” the young widow said, tears streaking her face.

It had taken the couple eight years to fall pregnant.

“He did nothing wrong. He didn’t even get to see his babies. He didn’t take them in his arms,” Viktoria said.

Bogdan, 35, was shot dead on 14 March while on a mission with the State Border Guard Service of Ukraine in the northern Chernihiv region as Russia’s war raged.

Family and friends tried to shield Viktoria from the news, understandably concerned about the impact it might have on her, while heavily pregnant.

It meant she only found out nearly three weeks later.

By that point her husband had already been buried.

“I learnt the news on 3 April and gave birth on the 4 April – at night the contractions started,” Viktoria said. She had been 35 weeks pregnant at the time.

Viktoria was speaking on Friday to Sky News, sitting on a bed next to a cot, where her tiny babies were sleeping. They were not yet four weeks old.

She is living for now with her parents in a small apartment in a northern city called Nizhyn. Her mother and father do all they can to help.

Bogdan, like other members of Ukraine’s border guard and armed forces, had been defending his country from Russia’s invasion since it began on 24 February.

He would often speak to his pregnant wife by phone but the calls would typically only be for a few seconds because of poor connections.

By chance, their last call, on the day before he was killed, lasted for longer – more than 10 minutes. Bogdan told his wife he was going on a mission and would have to turn off his phone – a usual routine.

He also tried to convince her to move out of the northern city of Chernihiv, where they lived.

Viktoria had been sheltering in the basement of a school for days as Russian soldiers attacked the city, attempting to encircle it and shelling surrounding villages.

“He said he would feel calmer if I moved away and told me that this was an order,” Viktoria said, recalling their conversation.

“But we laughed because usually it is me giving the orders!” she said.

“In the final seconds, he tried to say something more but the line was so bad…. I tried to call him back immediately but there was no more connection.”

She waited for him to turn his phone back on, but days past and she received no word.

During that time, the situation in Chernihiv became more dangerous. Even the local maternity hospital was damaged in the bombardments.

Viktoria decided to take her husband’s advice and flee Chernihiv city, moving in with her parents.

She continued to try to find out information on Bogdan. Before finally learning the worst had happened and he had been shot dead by a sniper.

“It’s a big wound for our life,” she said, breaking down again in tears, a tissue to her eyes.

“The big question is how? How can a human do that to another human?”

She opened up a folder to show a clear plastic bag containing Bogdan’s dog tag and two necklaces, including a cross, that he had been wearing when he was killed.

Viktoria also shared their wedding album and described how excited Bogdan had been about finally becoming a father.

“When we found out I was pregnant it was unbelievable happiness,” she said.

“We felt like we weren’t walking, we were flying. When we found out it was twins, our happiness doubled. He talked to the babies every day. I said ‘they can’t hear’ but he talked to my tummy every day.

“There was a pregnancy calendar on my phone and every Monday we read together about how the babies were forming, what they were hearing, how their eyes and ears were forming. He was waiting for the babies.”

The grief overwhelmed her again, making it hard to finish her sentences.

She said the twins gave her the strength to keep going in the darkness.

“The babies remind me we should continue to live. ‘Mum we can live only if you can give us your attention’,” Viktoria said.

“But I have none of my own support anymore because Bogdan was my support and my body armour – my everything.”

Bending over the cot, she tucked a blanket around the two sleeping bundles and whispered: “My boys, my babies, my little fish. Mummy’s here, my lovely boys.”

Meet the real woman behind the voice of Siri
Retired general predicts when Ukraine will see new tanks
Norway’s fossil fuel bonanza stokes impassioned debate about how best to spend its ‘war profits’
How the violent arrest of Tyre Nichols unfolded
‘I was sad for the institution’: Nancy Pelosi speaks out about McCarthy speaker vote