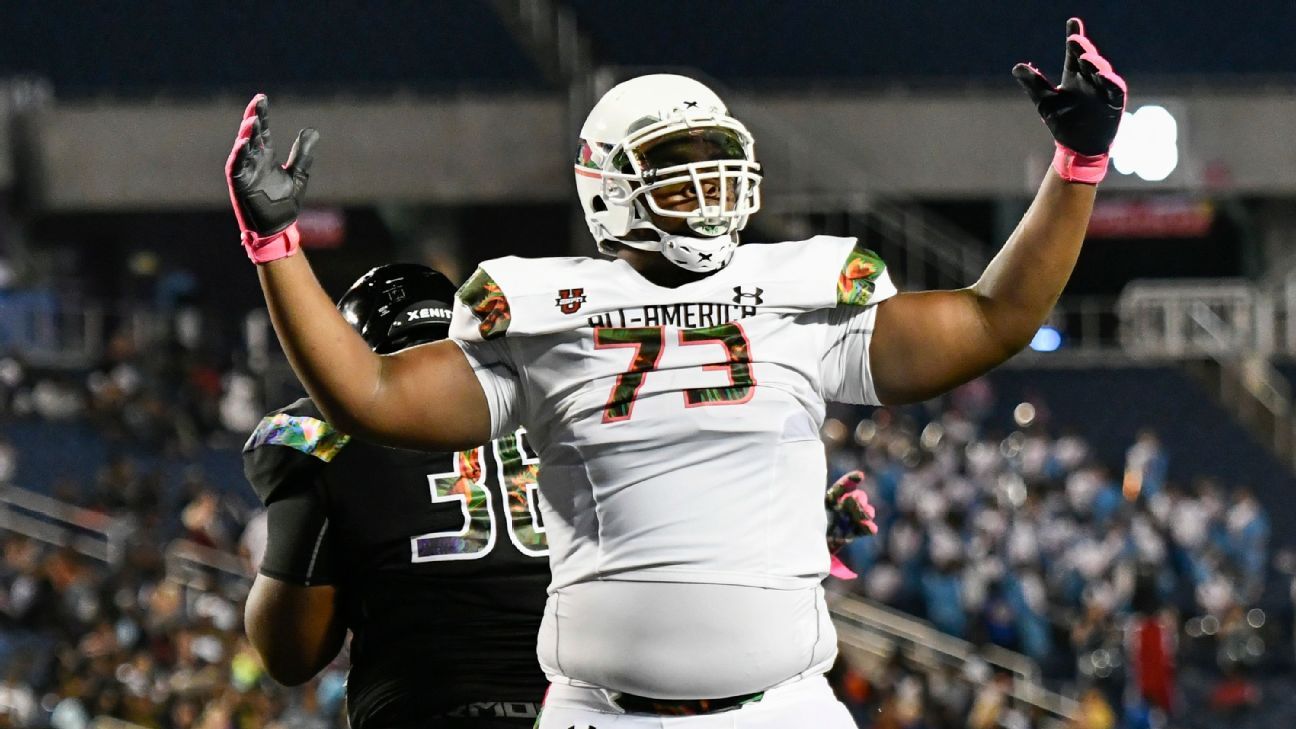 The 2022 NFL draft begins Thursday, with the final boards stacked and mock drafts being finished up before the clock starts ticking (8 p.m. ET, ESPN/ESPN App).

While there are many names on Mel Kiper Jr.’s big board that are familiar to recruiting fans, such as former No. 1 overall prospect Kayvon Thibodeaux, not all of his top projections had an accurate NFL forecast. We talk often about physical development and the unknown variables when evaluating high school prospects off pure film and combine results. That inexact science comes to fruition when looking back on this draft class.

In fact, the first two prospects, Aidan Hutchinson and Ikem Ekwonu, were both outside the top 20 in their high school position rankings. Ekwonu, who is projected as a top-three pick, was a consensus three-star on the top recruiting sites with minimal Power 5 offers.

Here is what Kiper’s top 10 were like as high school prospects.

Hutchinson was a prospect who played better than he tested and timed. He ran a 5.09 40-yard dash as a senior but produced all over the field for Divine Child High School (Michigan). He had an excellent frame with long arms and great strength to collapse the pocket as a pass-rusher and to blow up the run at the point of attack.

Hutchinson wasn’t a really flashy prospect, but a smart, tough football player with a relentless motor. Those tenacious traits continued to be his trademark at Michigan, where he also overpowered offensive tackles for a record-breaking 14 sacks as a senior. We stated in his scouting report that he needed to hit the weights to fill out his ample frame with more functional strength. Hutchinson added 11 pounds of muscle while at Michigan and lowered his 40 to the 4.7 range.

High school scouting report: He’s a tall kid with an excellent frame and a muscular build. He demonstrates a high football IQ and knows where the play is going. A high-motor kid who fights through the whistle and looks to punish opponents, Hutchinson is not overly explosive and lacks the speed to consistently get around the edge.

Testing results in high school reveal an explosive late bloomer, as Ekwonu posted a 27-inch vertical at 288 pounds. He was an impressive wrestler as well but still very raw as a football player with average feet. We thought he would stay inside at guard, as he lacked ideal height as well.

We were wrong. Ekwonu’s explosiveness, functional strength and agility make him unique as a tackle. Arm length helps compensate for his lack of height (6-foot-4), which is why he can survive on the edge. He has been someone who dominates defensive ends with initial quickness and power, limiting QB sacks and pressures. He transformed his body and footwork and is a great example of college weight room success.

High school scouting report: Ekwonu possesses a thick frame with good upper-body strength and looks to still have physical upside to grow. He has adequate first-step quickness and good balance. Pads can quickly rise, but he demonstrates good strength and can control and steer once he gets locked on.

Gardner is the definition of a late bloomer. Height (6-3) and length were his two best attributes coming out of high school, but his skill set wasn’t as refined. We questioned his speed and hips as well. Tests indicated Group of 5 times with a 4.74 40 and a 4.37 shuttle.

At the time, we felt his best fit was as an aggressive boundary corner or line-of-scrimmage defensive back, where he could use his size to shut down bigger, taller red zone targets. In the NFL, it will be interesting to see how Gardner holds up in off coverage against shorter, more sudden and elusive targets in man-to-man situations.

High school scouting report: Gardner is an athletic, thin defensive back who displays solid coverage skills. He will show up to defend the run, but lacks the bulk and strength to knock back or stop the ball carrier from falling forward on a consistent basis. It is vital that he adds size and increases his top-end speed to effectively compete against the next-level receiver.

Testing and times would have led us to believe Hamilton would eventually move to linebacker. He ran a 4.79-second 40 and a 4.29-second short shuttle, which given his measurables (6-4, 220) was a solid time.

An area where Hamilton really seemed to blossom was play speed. He pursued much faster than his testing times and his good range in high school developed into elite status in college. Hamilton looks like a linebacker now but still moves like a skill guy, which is why he doesn’t have to come off the field on passing downs and is a projected top-10 pick.

High school scouting report: Hamilton has great size for the position with a frame that can grow into an outside linebacker. He shows enough speed and awareness to play off the hash and make a play on the ball with good ball skills. He is rangy and displays the strength and tackling ability to play on the perimeter at the second level. He will need to vet top-end speed.

Neal is arguably the most physically imposing offensive tackle to come out of high school in the past 17 years. There are very few prospects who possessed his blend of size (6-7, 350) and production. It’s one thing to be that size and dominate with strength, but Neal always had naturally good bend and flexibility.

At Bama, he took flexibility to an elite level. His best improvement has been the twitchiness of his feet; it allows him to recover if he’s out of position or late off the ball.

High school scouting report: Neal displays adequate lower-body flexibility and agility for his massive size. When Neal stays low, he can drive defenders back and is capable of delivering good initial pop. But he is inconsistent in his ability to quickly get out of his stance and explode into defenders and can struggle to get push and sustain when he doesn’t. He could develop at OT, but if not, he can still offer value at guard. He has the upside to be special.

Stingley first turned heads as a ninth grader at the Deion Sanders Prime 21 camp. NFL Hall of Fame defensive backs were in awe not just of the physical gifts Stingley flashed, but also the instincts and football savvy he possessed at such a young age. It might not be a surprise given his late grandfather Darryl Stingley was a first-round pick of the New England Patriots in 1973. Stingley committed to LSU and developed into the top cornerback in the 2019 class as a senior and the No. 18 overall prospect in the ESPN 300.

If he had participated in the NFL combine that year, his 4.35 40-yard dash and 42-inch vertical jump would have placed him in the top three among cornerbacks. His elite speed and explosiveness, coupled with fluid hips, led to an All-America campaign as a freshman on the Tigers’ national championship team. Still a top-10 draft prospect, his stock could have been even higher if he displayed more consistency and played injury free as a sophomore and junior.

High school scouting report: Stingley displays good flexibility and shows the ball skills to be a potential playmaker. He plays with the toughness needed to be productive as an open-field tackler. He also has a good understanding of how to maintain leverage and stay in solid position to be effective in both the run and pass game. Adding more strength will increase his explosiveness as a tackler. Refining his backpedal and transition will enhance his cover skill set.

Thibodeaux was in a class by himself as an edge guy coming out of high school, earning comparisons to Myles Garrett. He was inconsistent at times, but more because he was rarely getting challenged as opposed to a lack of effort.

The question we asked in high school is still being asked today: Will Thibodeaux be a dominant every-down defender and not just a player who shows up in obvious passing situations? When he’s on, he’s on. When he’s not, he’s not. However, he has given great effort in trying to continue to improve as a run-stopper.

High school scouting report: Thibodeaux has excellent size with a big frame to develop. He flashes excellent range and a quick first step. He can improve his point-of-attack skills and pass-rush arsenal, but he shows his ability to attack with speed and power to be a physical and disruptive presence.

Wilson was certainly an elite player coming out of high school. He ran a 4.61 laser-timed 40 as a junior in high school and was ultra-explosive. He displayed one of the best combinations of speed, quickness and route-running prowess as a high school prospect in recent memory.

Wilson developed the mental side at Ohio State, where he was a load to handle one-on-one because of his ability to manipulate coverage. He really blossomed as an intermediate route runner, an area that was undeveloped in high school.

High school scouting report: With excellent size and ball skills, Wilson is a red zone threat with the ability to adjust to the ball in the air. He can play on the outside with competitive speed and can separate as a route runner. He has excellent traits to continue his development and has upside as a route runner.

Walker impressed with his production in high school with strong measurables (6-5, 275). He ran a 4.94 40 at 263 pounds during his junior season and still might have the highest upside of any front-seven player in this draft class because he can play anywhere, just as in high school.

He can stand up, he can rush, he can put his hand on the ground and, surprisingly, he’s good in space. Walker is like Dont’a Hightower, but a better pass-rusher.

High school scouting report: He has an excellent blend of size and strength and can be stout one-on-one. He flashes good ability to close and adequate get-off. Though he needs to continue to develop as a pass-rusher and further utilize his power, Walker is a big, powerful defender who could develop as a 3-4 DE or DT and can be particularly stout against the run.

London has been a huge climber ever since he entered the collegiate ranks. He has ideal size and measurables (6-5, 210) for the NFL level.

Out of high school, he needed to address his average speed. While he still won’t put up numbers like Wilson or Chris Olave, he became a much faster player in college. He improved most upon his suddenness and route running considering how big he is. His ball skills and hands when contested have always been at an elite level. He reminds us of former Chicago Bears and Philadelphia Eagles wideout Alshon Jeffery.

High school scouting report: London is big, tall and physical, but does not run well. He shows some suddenness for a big guy, but labors to get to top speed. Still, he has excellent ball skills and hands, is terrific when contested, knows how to use his body and wide wingspan, and overall is very productive.